The Hollow City is a city in central Coldharbour. It was once an Imperial settlement in Tamriel devoted to Meridia, and her power continues to shield it from the influence of Molag Bal.

The wayshrine lies in the northwestern corner of the city, with the guild kiosks spanning the street heading east. A broad lake lies south of the wayshrine, and a gate heading out of the city is up the stone stairs in the west. A bridge crossing the lake lies near the wayshrine. The stable, Coldharbour Mounts, is on the other side of the lake. The local crafting writ turn-in area, Fizengig's Trading Emporium, is next to it. A pavilion lies south of Fizengig's Trading Emporium. When the city becomes populated by Coldharbour Survivors, a bard with a lute will sing for a crowd at this pavilion.

The Hollow City sits in between the three Subzones in Coldharbour. A few points of interest are located within the city, and thus outside of any of the Subzones.

As you progress through the quest The Army of Meridia, the people you have helped move into the city and begin to restore it. 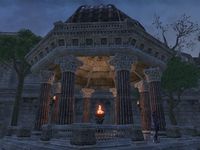 The Hollow City Wayshrine is located in the west of the city, near the pond and next to the exit to the Shrouded Plain. Unusually, the wayshrine glows with an orange flame. 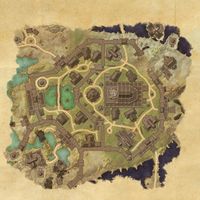 A map of The Hollow City

This Elder Scrolls Online-related article is a stub. You can help by expanding it.
Retrieved from "https://en.uesp.net/w/index.php?title=Online:The_Hollow_City&oldid=2387842"
Last edited on 12 April 2021, at 01:05