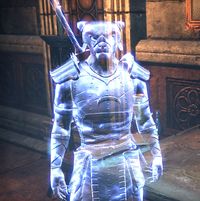 Tubidan the Alarmist is a Khajiit member of the Undaunted who can be found in a side room at The Shining Star in The Hollow City. He and his compatriots, Sahba the Bonecrusher and Savage Sehlena were killed years ago by an evil wizard, but they haven't let that stop them.

, and even though he can't drink it, this will count towards the This One's On Me achievement. When you do, he will tell you about the Vaults of Madness, adding the location to your map if you haven't discovered it yet.

"My friend, this table is for the worthy, the bold.
nAnd this one thinks you don't look like either."

When you greet him, he will welcome you to the city.

"This one hopes the Hollow City finds you well, Undaunted.
Meridia's wayward township is many things, but it's never dull. Especially for an Undaunted."
Who are you?
"This one is called Tubidan. The most dauntless of the Undaunted, the Mane of Meridia's Vanished City, they call him!
An honor this must be for you. So … how about it?"
How about what?
"Would you like to buy a drink for this Khajiit?"

gold] (Giving him the gold causes the Undaunted Song scene from below.)
No.
"You'll come around."

After paying for his drink and witnessing the song. You can speak with Tubidan further and he can tell you how his group became spirits in the first place.

"I appreciate the drink. Helps keeps the anxieties under control in the depths of a dungeon.
This one believes that you are never truly alive unless you are stumbling through a trap or matching wits with a Daedra! So go! Be alive!"

How did you get here?
"This one and his Undaunted friends were very busy in life. Always delving into ancient dungeons, raiding a mad mage's home, or bursting out of a necromancer's coffins to terrify and then behead them.
Those were exciting times."

Why haven't you passed on?
"Long story. This Khajiit and his Undaunted kicked down many doors in our careers.
Kicking down doors often reveals great treasure, or forgotten places. But sometimes it reveals an angry wizard who removes your soul and stores it away."

A wizard took your soul?
"Yes, centuries ago, I think—hard to recall. He took our souls, put them in a contraption. It must have broken, because one day, this one and his Undaunted were freed.
The wizard—long dead. And this city had wandered far from where it was."

What does an Undaunted have to be anxious about?
"Oh, everything! Everything! This Khajiit's friends will tell you that they fear nothing—a powerful trait! But this one is greater than they … because this one fears everything!"

What do you mean?
"To be Undaunted is to be brave—and most will tell you different, but true bravery does not exist without fear. What does the fearless Khajiit risk? Nothing!
And those with nothing to risk have no passion to gain."

Explain.
"When I go to the stream to wash my linens? A sudden storm could spirit me away! See the sword on my back? Could take my head when I sheathe it! A Daedra wants to talk? Their words literally cut like blades!
But I live my afterlife just the same."

Where can the Undaunted prove themselves in Coldharbour?
"My friend, simply walking the crumbling earth of Coldharbour is proof enough of courage! And surviving a testament to strength!
Though—I suppose there is one place more threatening and horrifying than most, save for the Throne of Brutality itself."
What place?
"The Daedra call it the Vaults of Madness.
It's the home of a demigod known as the Mad Architect. This one thinks he's Daedric, others a mere mortal—with frightening magical abilities. This one has long dreamed of raiding his coffers."
Who is this Mad Architect?
"He builds for the Daedric Princes—black-spired castles, bleeding towers of flesh. Buildings as grotesque as they are instruments of torture, and the Vaults are his vilest creation.
They are a true test for an Undaunted."

If you enter the Undaunted's room after completing the Vaults of Madness, Tubidan will realize and cheer you on.

Tubidan the Alarmist: "And the Undaunted returns! And from the Vaults of Madness themselves! Hope it was worth it—defeating the Mad Architect couldn't have been an easy feat."

After you buy Tubidan the Alarmist a drink, he will insist on a song. Much to Sehlena and Sahba's dismay.