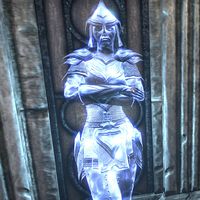 Sahba the Bonecrusher is a Redguard spirit and a member of the Undaunted found in The Shining Star, the inn located in the Hollow City.

"This room's for the Undaunted, stranger. Undaunted only."

When you speak with her, she is happy to see that the Undaunted are still recruiting since her death centuries ago.

"Name's Sahba. Sahba the Bonecrusher. Good to see a fellow Undaunted.
And a live one, at that. I'm glad the extended family's still recruiting new members."
What are you doing here?
"There's not much I can do. Can't move on from this plane. And being dead, I can't return to Tamriel. At least there are Daedra to match blades with."
How did you get here?
"I don't care much for that story. Ask Tubidan if you must."

After you buy Tubidan the Alarmist a drink, he will insist on a song. Much to Sehlena and Sahba's dismay.