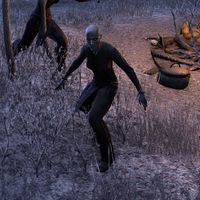 Soul Shriven (or Soul-Shriven) are the remnants of individuals who have their souls stolen by a Daedric power.

Daedric rituals sometimes drain a mortal's soul from their body. When this happens, the body is left naught but a shriveled husk, which is referred to as soul shriven.[1][2]

Molag Bal uses soul shriven as slaves; they are eternally doomed to toil in torment for his glory and amusement.[3][4][5]

Molag Bal's lust for the enslavement of mortal souls is such that at the moment of their death, he employs various methods to divert a mortal's soul from its journey to the afterlife to imprisonment and slavery in Coldharbour, his realm of Oblivion.[6][3] Once the soul arrives in Coldharbour, it is exchanged for an essence commonly known as the vestige. The vestige attracts to itself a shapeless but energetic material called Chaotic Creatia. In Coldharbour, this creatia takes the form of a substance known as the Azure Plasm - ubiquitous pools of blue slime.[3][6] The Azure Plasm coalesces around a vestige and forms a corporeal body with the semblance of the shape it wore in life. The process is similar to how lesser Daedra reform on their respective planes of Oblivion, after they're banished or slain.[6]

However, since these "soulless ones" are not native to Oblivion, their bodies are mere imitations of their form in life. As such, these facsimiles suffer rapid wear and decay. Scholars have theorized that the reason these bodies are flawed is because they have lost the focusing principle of their Anuic souls, so their vestiges are imperfect patterns.[6] Where their souls are kept is unknown, but some believe they are contained within soul gems, and that the soul shriven can feel themselves being jostled around as their respective gems are moved from one place to another.[7] Soul Shriven are a form of undead, and can sense necromantic influence.[8] Soul Shriven do not need sustenance to survive.[9]

Despite their rapid decay, the Soul Shriven are henceforth tortured in deepest bowels of Coldharbour for the amusement of Molag Bal. Various Dremora administer the suffering in a very structured and orderly manner, going as far as meeting "toil and torment quotas".[4] The Soul Shriven themselves are also subject to meeting certain quotas.[10] Soul Shriven who collaborate with their guards and inform on their peers may be rewarded with a shift of lighter labor, or a visit to the Grotto of Depravity.[11] There, the slaves have the opportunity to dance, play music and go fishing in the plasm pools. They are supervised by their Daedric captors during their visit.[12]

After years of torment, their minds lose any notion of reality and eventually they succumb to insanity. The oldest of these Soul Shriven are known as ferals. They fear neither pain nor death, and their eternal hunger drives them to attack and eat anything - including each other. The lesser Daedra who roam Coldharbour are said to fear them.[5] One particular individual didn't become insane, despite supposedly being the oldest of the Soul Shriven. Sir Cadwell, a gallant knight in his previous life, was already insane when he arrived in Coldharbour but now sees the realm as a wondrous place.[13][8] Eventually all Soul Shriven die, but due to the nature of the vestige, their body simply reforms upon death and the torturous cycle repeats itself.[6][5] When Soul Shriven become too worn and decrepit for further labor as thralls, they are often set loose to run through the wilds of Coldharbour as prey for hunting Dremora.[14]

While Soul Shriven lack the focusing principle of their Anuic souls, scholars theorized that if they still possessed some other intrinsic Anuic aspect, they would form an unflawed body in Coldharbour that was a perfect duplicate of the body worn in Mundus. Should this individual bear a sufficiently high Anuic valence, their body would form almost instantaneously upon contact with Padomaic creatia. Further, scholars extrapolate that such an occurrence would take place if Mundus was subject to an existential threat. In this situation, the Heart of Nirn would spontaneously generate such individuals as a way of defending itself from destruction.[6] It would also be possible for a Soul Shriven to restore their physical form if they became re-attuned to Nirn. One such method is by absorbing the power of a Skyshard, fragments of Aetherius which carry the essence of Nirn within them.[15]

These theories were seemingly proven correct, as in 2E 579 Molag Bal began an attempt to meld his plane of Oblivion with Nirn to create a single nightmarish realm.[16] Only for a few years later, in 2E 582 one such individual known as the Vestige seemingly exhibited such exceptional Anuic qualities and escaped Coldharbour, going on to combat the Daedric threat as foretold by the Elder Scrolls.[6][15][16]