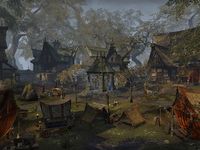 The Baandari Trading Post (ESO)
Do not slander another child of the Baandari.
Remain mindful in all dealings.
A gift must be returned in kind.
A fair trade need not be fair only in gold.
Truth and cleverness need not be enemies.
Find what is lost, trade what is found, and leave what has no purpose.
—The Way of the Baandari

The Baandari Pedlars (or simply the Baandari) are a group of nomadic Khajiiti merchants that travel all over Tamriel to sell their wares. Despite the animosity they experience from the other races, they are inclusive when it comes to recruiting non Khajiit into their ranks.[1] They live by a code of conduct known as the "Baandari Code," which states that loose items are rightfully salvageble, the peddlers must indulge clients in prophecies they want to believe in, and guarantee them of a product's utmost value and versitility. The Baandari Clan live by this lifestyle and with no other alternative as it is set in stone.[2] They considered themselves the "wandering litter" of Baan Dar, the Bandit God of southern Tamriel. They adopt the god's will, as seen in their name.[3][4]

The Baandari tribe travel all over Tamriel, as far as the northern regions of the Iliac Bay and the Western Reach, or the elven territories of Valenwood and the Summerset Isles. The Samar Pekoe shrub of Anequina is commonly harvested by the Baandari to make smooth and tannic-flavored tea.[3] They are greatly disliked by the other races. Some cases have described them as evil spirits incarnate and have the notion that their mercantilism is just a cover for their thievery and fraud.[5] They tend to camp outside of large cities and move on to their next destination,[6] but some cases, they settle in certain areas. Most notable is the Baandari Trading Post, found on a crossroad along the Xylo River in Malabal Tor, towards the regional border to Reaper's March. In 2E 582, the Baandari Trading Post was attacked by the Houndsmen, Wood Elf devouts of the Daedra Lord Hircine. For protection, the head of the Baandari Tradepost, Eraral-dro hired Gold Coast mercenaries but suspected that they would turn on them. Fortunately, he was able to drive them out with the help of a wandering traveler.[7][8]

The Baandari use a variety of mounts, easily recognizable by their red and gold tack; some animals, like the Senche-Lion cubs, are trained from birth to prepare them for a life as mounts[9] while pack ponies are popular enough with adoring children to be sold to them.[10] Riders use Lunar Compasses to help them navigate the various provinces, which have also been known to be retrofitted into repurposed Dwarven Spider Vamidiums.[11] The Baandari also repurpose Dwarven Spiders to help retrieve inaccessible items.[12] They are known to breed Black Senche-Panthers as mounts to easily leave town at night[13]