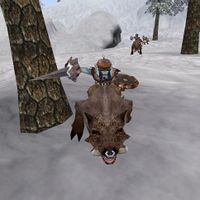 A Riekling mounted on a Tusked Bristleback (Bloodmoon)

Rieklings are a race of blue-skinned ice Goblins, related to the other Goblin-ken.[nb 1][1][2] The most common Rieklings are small in stature and found on Solstheim, but larger Rieklings were once present on mainland Skyrim in the Second Era.[2][3][4] They are aggressive, and can be dangerous in groups. Despite being considered little more than beasts by the local Nords, Rieklings are naturally cunning. Rieklings speak the goblin language, and can be conversed with by expert linguists.[1] Some speak Cyrodilic, although they rarely say anything intelligible.[5] Apart from this, they seemingly have little culture of their own. They scavenge what few relics they can find from the other races, and form strange attachments to these treasures.[6]

Rieklings are known to use spears,[7] lances, blades, shields and axes in combat.[8] They often tame Tusked Bristlebacks, a native type of boar, for use as warmounts. They also have the ability to create simple traps to guard their lairs. Rieklings can be found wandering the wilds of Solstheim, in their lairs, or waiting in ambush for an unlucky traveler. They have a tribal society, often led by a chief. Members of the tribe are known as "tribe-kin". Rieklings can construct basic structures, such as tents, fences, bridges and lookout towers. They partake in ritualistic "Godspeak" ceremonies. One such ceremony involves the use of Scathecraw, or "redgrass", a plant native to Vvardenfell which spread to southern Solstheim after the Red Year. Rieklings are fond of "dizzydrink", alcoholic beverages that they scavenge.[9]

The origins of Rieklings are a mystery to the people of Tamriel. The local Nords believe them to be descendants of the snow elves, related to the other elven races,[10] but this claim is not supported by scholars.[11] The Imperials consider them to be nothing more than "ice goblins". The Rieklings of Solstheim consider it to be the entire world "within great water",[9] meaning that if any exist in other places, the Solstheim Riekling are not aware of them. They commonly dwell in ice caves or remote locations, but they have been known to inhabit Dwemer and Nordic ruins as well.[7]

The Rieklings have some notable history, such as in the mainland in 2E 582, the Ice-Biter Tribe of rieklings attacked the town of Cragwallow in Eastmarch and were wiped out in retaliation.[3] In 2E 582, The Coldsnap Tribe inhabited the Dwemer Vault of Mhuvak, making the retrieval of the legendary Wrathstone problematic.[4] They used some Dwarven gear as a result of their discovery of an abandoned Dwarven site (even using it to armor a troll), with some believing that their hoarding of scrap would result in them achieving more advanced civilization,[1] but they were slaughtered by members of the Wrathstone expedition.[4]

In Solstheim, the Skaal are attacked by them frequently.[12] Karstaag the frost giant once employed Rieklings to guard his fortress, Castle Karstaag. When he was taken by werewolves to participate in Hircine's Great Hunt in 3E 427, a Riekling named Dulk took control of the castle in his master's absence. Dulk attempted to enlist the help of several grahls, but the creatures turned on the Rieklings and killed many of them. The grahls were killed by the Nerevarine and a Riekling named Krish.[8] In 4E 201, a tribe of Rieklings attacked the mead hall at Thirsk and drove out the Nords.[7]

Below are a list of Riekling Tribes whose names are known. Other tribes exist, but have not been named and are not included in the list.

The Coldsnap Tribe were a riekling tribe who squatted in the Vault of Mhuvnak of Eastmarch.[13] They were believed to be related to the Ice-Biter Tribe, possibly an offshoot, and included standard goblins, ogres, and even a troll among their ranks.[14][15]

The Ice-Biter Tribe were a riekling tribe found in the Cragwallow caves of Eastmarch. They were known to abduct people.[3][14]