The Grazelands in their prime 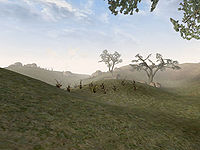 The Grazelands during The Blight

The Grazelands (also called Sunna Guradan)[1] were the pastoral heartland of Vvardenfell. On the northeastern corner of the island, these grasslands extended from the ancient stronghold of Falensarano north to the coast above Tel Vos. To the east, the Grazelands stretched to the coast and the islands of Zafirbel Bay, facing the Telvanni Peninsula. To the west, it was bounded by the forbidding steepness of the mountains of the Ashlands.

The flora of the Grazelands was dominated by wickwheat, and this is one of the few areas where it grew. There were trees spread sporadically around the landscape. Stoneflower was the most frequently flowering plant. It was home to wild guar, alit and shalk. The south was dominated by hackle-lo shrubs, whose leaves could be found across the island. It was also a region where, due to its scarce population, it was not uncommon to see Daedra, including golden saints and ogrim, just walking around in the open.

Much of Grazelands was uninhabited and thus belonged to the Temple. The population of the Grazelands consisted of mostly nomadic Ashlanders. Other inhabitants included those who lived in Tel Vos and the nearby town of Vos, along with Master Aryon in the tower of Telvanni.

Ashlander settlements in the area were the Ahemmusa Camp in the north and the Zainab Camp to the south. The presence of Tel Vos and the proximity to the Telvanni homeland meant that this House was the most likely to make future claims in the region.