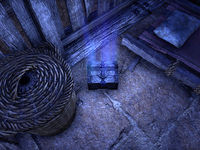 Thieves Troves are small wooden containers marked with the Thieves Guild symbol that can be found across Tamriel. They have a distinctive blue glow and often contain valuable items. The troves cannot be opened unless you have the ability to learn the Finders Keepers passive in the Thieves Guild

Thieves Troves often contain a leveled amount of gold, some lockpicks and a rare item. All the items are marked as stolen, and will have to be laundered at a fence before they can be traded. Troves are also marked as owned, and thus players should ensure they are completely hidden before stealing from one.

The rare items found in troves include:

As of Update 12, you have better chances of getting more useful items from Thieves Troves as your rank in the Thieves Guild increases.

Thieves Troves may be found in the following locations: