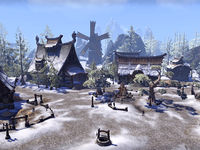 Bleakrock Village is the main village on Bleakrock Isle. After arriving from Coldharbour or Stonefalls, it is where you begin your quests as a member of the Ebonheart Pact. Blacksmith Maesa's husband, Holsgar, will have hauled you into the village after you washed up on the shore. Bleakrock Village was settled because the Pact put out a bounty for settlers to come and build civilization for the soldiers at the garrison to come back to. The soil is poor, and the island is snowed over for six months out of the year. Its inhabitants live primarily off of fish and dairy products.

Bleakrock Guards patrol the village, keeping criminals in check. Aera's Household Notes are located in a barn west off the road leading towards the wayshrine. Littrek Earth-Turner works outside this barn, near chickens and pigs. His father, Denskar, works across the road east from him, near the cows. The Snow-Bourne House lies south of Denskar's cows. Earth-Turner House is located south of Littrek and his pigs.

The Bleakrock Trading Hall lies south of the Earth-Turner House. The artisans can be found in the hall proper, and the merchants are located on the western end of the hall. A barn is located north of the trading hall, and the Mill lies further down the road west of it. Fields of hay lie west of the trading hall. Owls often perch atop the gates leading into the fields. Halmaera's House lies up the hill west of these fields. Eiman and Rolunda's House is located south of the trading hall. Cows munch on hay to the right of the building, and chickens wander behind and around it. The home's inhabitants are off at Orkey's Hollow, which lies far to the north, past the island's wayshrine.

Captain Rana's Office lies to the east of Eiman and Rolunda's House. A Nordic barrow known as Last Rest lies south of the office. There is a graveyard in front of the barrow. If you head up the path southeast of the barrow, you'll reach the watchtower. The docks lie to the west. There, you'll find fishing spots, and navigators who will take you to lands near and far. Mudcrabs skitter beneath the docks. A pamphlet is posted next to Dastas Arenim.

Tillrani Snow-Bourne is located in the center of town, by the statue. She is attempting to appeal to the villagers for an evacuation. A ship has been spotted off the coast. The village is usually supposed to light the signal tower when they spot a ship, but Captain Rana is stalling because she wants to make sure it's not just a merchant ship.

* These people appear in the village after completing the respective quests. 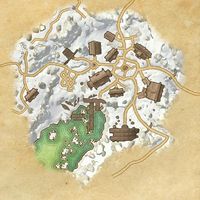