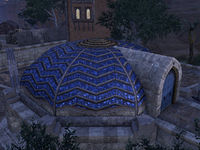 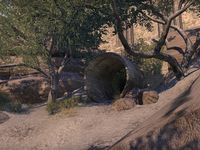 The entrance outside of the city

The Den is a hub for guild quests and functions as an Outlaws Refuge, providing all the typical services. The main chamber contains museum pedestals for the items on Kari's Hit List.

You gain access to the Den instantly; it is, however, rather empty in the beginning. As you progress through the Thieves Guild questline, the headquarters gradually fills with more returning members and you will often hear conversations between some of the more prominent members.

The Lady in the CisternEdit 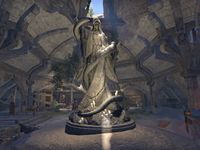 As you progress in the Thieves Guild, you will find notes in various locations theorizing about the statue found in the center of the Den. Reading all of the notes rewards you with an achievement: The Lady in the Cistern.