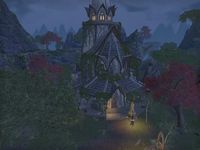 Glister Vale is a small, secluded vale and fortified tower in central Auridon, due west of the town of Mathiisen. The vale is home to a great number of wolves, who seem to be guarding the entrance to a single tower. Some of the Queen's entourage were camping just outside the Vale during their grand tour of Auridon when they were abducted by a mad mage.

To access the Vale you will need to pass through a cave north of Eminelya's camp. A Heavy Sack spawns in the center of the tunnel next to a skeleton, and the cave is inhabited by giant bats. A Thieves Trove can sometimes be found on one of the crates here, beside a lantern. The Vale itself is populated with a number of wolves and is enclosed by cliffs on nearly all sides. To the west of the main building, beneath a tree by the cliffs, another Heavy Sack and Thieves Trove spawn next to a dead body. A locked chest (simple) may be found just to the north.

Only the entry level can be entered if you are not on the related quest. A journal can be found on a table at the back, and a trapdoor to Sanessalmo's Lair is nearby. The mage has been using the tower as a laboratory to conduct tests on the abducted members of the entourage. The Faded Note from Nuulehtel's Despair will appear on the floor here after the quest is complete, and a Royal Decree can be found on the bed.

With the quest active, speak to Lanitaale and the Projection of Sanessalmo to unlock the rest of the tower.

The first area is a realm of ash and lava reminiscent of Stonefalls. You will need to fight through dozens of flame atronachs to reach Minantille, and also deal with her rage. You can return to the Tower via the portal you came in through, or proceed through the new portal.

This mushroom cave is full of giant bats and imps. Merion can be found to the right as you enter in a small makeshift alchemy lab with a Malevolent Spirit. Merion's Diary can be found next to his backpack in the center of the cavern. Both the southern path and western path lead to an upper level of the cavern where you will need to find ingredients for a potion during the quest to save Merion. The only way out is back through the portal to the Tower.

The third area is an ice cave inhabited by bears and wolves. Nuulehtel is just north of the entrance portal. A Faded Note can be found next to a dead explorer in the western tunnel, explaining a bit about Sanessalmo's past. A second portal appears after you have rescued Nuulehtel, leading to Sanessalmo's Lair.

The mad mage himself awaits in his lair under the tower. There are no treasures of note here and the lair cannot be reentered afterwards. 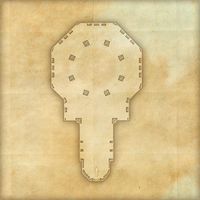 A map of the Glister Vale temple 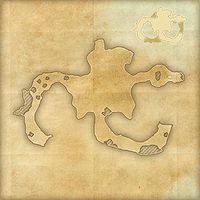 A map of the lower Bliss area 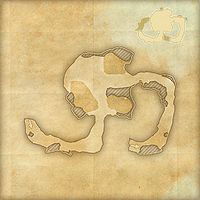 A map of the upper Bliss area 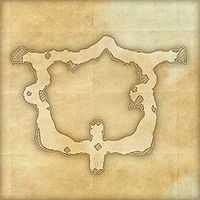 A map of the Despair area 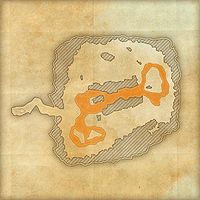 A map of the Rage area
Retrieved from "https://en.uesp.net/w/index.php?title=Online:Glister_Vale&oldid=2178715"