The only known map showing the Systres 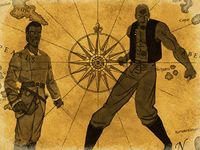 Closer view of the islands (right)

The Systres are a group of three large islands in the Abecean Sea, far to the southwest of Hammerfell and northwest of Summerset Isle.[1] The largest island is named High Isle, while the jungled prison colony of Amenos lies to the north.[2] The nearest islands are Pankor to the northwest and Eyevea to the southeast; another group of three smaller islands are found directly west, southwest of Pankor.

At some point in time, the island was acquired by the Second Empire, at the time ruled by the Akaviri Potentate. They used to it keep Reman malcontent and over time, it changed hands several times. At one point, it was sold to the Bretons by the Colovian Estates.[UOL 1]

The island was considered by the Empire to be Hammerfell's territory in 2E 864.[3]