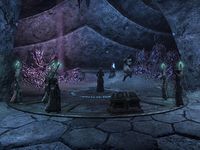 The Foolkillers Clan is Dremora clan in service to Molag Bal based in Coldharbour.

The Foolkillers were once betrayed by Deathbringer Clan, who rose to prominence in Coldharbour in their place.[1] The vestiges of the clan were trapped within a set of armor by the Grievous Twilight Dusk.[2] A Foolkiller named Lyranth avoided that fate and swore vengeance upon the Deathbringers.[1] She was later summoned in 2E 582 and harvested for her essence by the Aldmeri Dominion alchemist Ruuvitar as part of a plot to defeat the Ebonheart Pact, but she managed to break free and return to Coldharbour.[3] Allying herself with a mortal invasion force there, she first worked with them in the Coldharbour prison the Tower of Lies[4] before recruiting the invasion force to assist her in banishing Deathbringer leader Valkynaz Seris, making her the new Valkynaz of the Reaver Citadel. With his death, the Foolkillers returned to Coldharbour and took control of the Pyramid for themselves.[5]