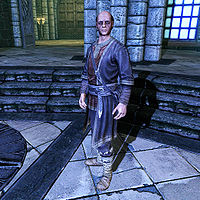 Phinis Gestor in the Hall of the Elements

Phinis Gestor is a Breton conjurer at the College of Winterhold, and an expert-level trainer in Conjuration. When your conjuration skill reaches level 90, Phinis offers a quest that, when completed, rewards you with the Flame Thrall spell. This is equivalent to the Conjure Flame Atronach spell, except that the conjured ally materializes permanently instead of temporarily.

He sleeps every night between midnight and 7am in his room on the ground floor of the Hall of Countenance. After waking, he spends the morning in his room eating, relaxing, or wandering around it. At noon he enters the Arcanaeum where he remains for ten hours. At 10pm he will either wander the Hall of Attainment or return to his room to relax or go to bed.

He wears master robes of Conjuration and a pair of boots. As a conjurer he knows the Conjure Flame Atronach and Conjure Frost Atronach spells, along with a few spells from other schools, specifically Ice Spike, Ice Storm, Stoneflesh, Steadfast Ward, and Fast Healing.

If you ask about conjurers outside the College, he mentions his ex-mentor Falion, the master level Conjuration trainer. Phinis will also mention some missing apprentices: Yisra, Rundi, Borvir, and Ilas-Tei. You can search for them, but they are all dead and have no related quests. These should not be confused with the "missing students" mentioned in the Midden Incident Report found in The Midden Dark - the incident report mentions a different Archmage than Savos Aren, and can be presumed to have occurred no less than centuries before.

"Should you ever fall victim to an unfortunate accident, I promise your remains will be put to good use..."
"The people of Skyrim have no appreciation for what we do here. Not that I care."
"That 'incident' in Morthal was just a misunderstanding. No matter what the guards claim."
"There are few places where one can pursue my type of work without fear of persecution."
"I care little for idle conversation, but perhaps you need help with Conjuration magic?"
"Nasty business with that Ancano fellow. Pity that I was unable to assist, but I was... otherwise occupied."

Are there many Conjurers outside the College?
"Not within society, no. Many who practice within the school of Conjuration do so on their own, secretly. Falion is the only one I know who is public about what he does. He was once my teacher here, but left the College years ago."

Why did Falion leave the College?
"He didn't like the Arch-Mage. Hated dealing with him, hated having to answer to him. Falion said he hated what this place was becoming. So he just left. Aren found a note on his desk, and that was it. I understand he settled down in Hjaalmarch, and his presence there caused something of a problem."

Summoning undead isn't frowned upon?
"By Sheor, no. Those archaic policies died out with the Mages Guild, and were never enforced here. Necromancy, as any other type of magic, is a tool to be used. Of course, non-mages may not see it that way, so we don't go around flaunting it."

Can you teach me about Conjuration?
"I'll teach you some of what I know, but be careful."

When your conjuration skill reaches level 90:

What else is there to be learned about Conjuration magic?
"How quickly you've advanced. Most impressive. There are spells yet to be learned, powerful spells that can more closely and more permanently bind creatures to your will. But there are risks. There are always risks. You must summon and command an unbound Dremora."

Do what now?
"These spells are difficult, even for one as skilled as I. To even begin to inscribe them, I need something very special. A sigil stone from an Oblivion gate. I do not have one in my possession. Nor do you, I'm sure. So we require a Daedra to retrieve one for us. You will summon a Dremora, and order it to bring a sigil stone to you. I will then inscribe the spells for you."

Great. How do I do that?
"I will teach you the spell to summon the Dremora, but know that it will only work in a place properly prepared for the event. Once you have summoned the Dremora, you will order it to deliver to you a sigil stone from an Oblivion gate. Once I have the sigil stone, I shall inscribe the spells that you seek."

Either option leads to another set of two choices:

Sounds easy enough.
"If only that were true."

If you need a sigil stone, why aren't you doing this?
"Because I have no wish to be harmed."

"Summoning an Unbound Dremora is not like other Conjuration spells. It will not simply do your bidding. You must first prove you are in control. Here is the spell you need. Go to the top of the Hall of Attainment; I have prepared a place for you there."

Once you have the sigil stone:

I have your sigil stone.
"Mine? Oh no, the stone is yours. I simply need to borrow it a moment... Now, let's see what there is to see."

What did you see?
"I have the knowledge I need. And so you may have your stone back, and also please take this. You have done well."

Is there an elven mage here that studies stars?
"Stars? You wouldn't be referring to that incident a few years ago? I still say that exile was far too harsh.'

What is it? What happened?
"You shouldn't ask me. There's an Altmer named Nelacar in the Frozen Hearth. He's the one to talk to."

Did you say "exile"?
"Yes, I did. I shouldn't be the one to tell you about this. There's an Altmer named Nelacar in the Frozen Hearth. Believe me, he'll know."

"At this time, I would like to make a few statements regarding policy here at the College. Please refrain from practicing Conjuration spells in view of the town of Winterhold. Atronachs have a tendency to frighten the locals. Undead.... well, I don't even think it needs to be said. Urag has asked me to remind everyone to please return materials borrowed from The Arcanaeum in the same condition as you received them. If this is impossible due to misuse or accident, Urag recommends finding a replacement copy to deliver to the Arcanaeum. Failure to do so will result in paying, in Urag's words, "a blood price." I did not ask him to elaborate on that point. Once again, I must ask that everyone please clean up any materials used in the common areas. We've had yet another sprained ankle due to soul gems being left on the floor. Let's please try and keep injuries to a minimum. The Midden remains off-limits at this time; while the initial outbreak has been cleaned up, the area is still considered hazardous. No more experiments are to be carried out there, and mages are advised that you enter the Midden at your own risk. While Drevis appreciates the spellcasting skill that went into somehow cramming several hundred apples into his pillow... He would ask that it please not happen again. He has suggested that, should he find out who is responsible, he is well versed in making things disappear permanently. There have been unconfirmed reports that someone has been sneaking into the town of Winterhold while invisible, and causing... issues. This goes quite against College policy, and the party responsible is advised to cease these actions at once. Any information as to the whereabouts of the previous group of Apprentices would be greatly appreciated. As of yet, there has been no sign of them."

"Projects are underway to discern the origin and nature of the College's recent find in Saarthal. Any and all theories are currently being considered. Those with ideas should please speak with Mirabelle. At this time, there is no indication that, as has been rumored, the object is in fact a physical part of Magnus, the god of magic. It has been suggested that the object is a gateway to the realm of Aetherius, but nothing has proven that idea one way or the other. It has been proposed that the object is in fact the entirety of Aurbis in one physical space. This would of course mean that Tamriel, indeed all of Mundus, is actually contained within the sphere. It further suggests that we are somehow then outside our own existence while looking in at it. While the idea seems dubious at best, it has not, at present, been entirely ruled out."

This is the merchandise found in Phinis' merchant chest. These items are only available if purchased from the merchant; they cannot be pickpocketed or stolen. They are restocked every two days.