While exploring The Midden Dark beneath the College of Winterhold, you will discover a circular room littered with blood and skeletons. In the center of the room sits a small statue in the form of a gauntlet. On the table nearby there will be a key and an incident report which describes a failed summoning ritual and four rings. 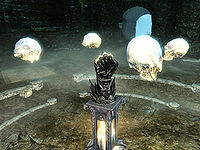 Once all rings are placed on the gauntlet ...

Following the clues in the report, the player can find the needed rings in a master-locked chest located in the Arcanaeum. The lock can be picked, or simply opened with the key, in order to obtain the four ornamental rings: Pithi's Ring, Treoy's Ring, Balwen's Ring, and Katarina's Ring. Note that the rings are owned, and removing them from the chest is considered stealing.

Once you have obtained the rings, return to the gauntlet in the Midden Dark.

Place the rings on the gauntlet by activating each finger as follows: 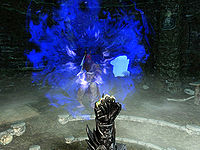 ... Velehk Sain will be summoned. 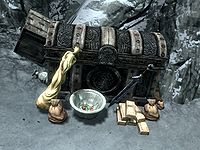 Once all four rings are placed on the appropriate fingers, the fingers will curl into a fist, and a Dremora pirate named Velehk Sain will be summoned. He will bargain with you for his release, offering treasure from his pirating days in exchange. You can choose out of two options: