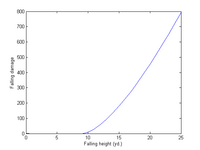 A fall of up to about 9 yards will not hurt you; however, the range of heights from which falling will hurt but not kill you is fairly narrow. In general, falling more than three stories is potentially fatal. Falling damage can be avoided by landing in moderately deep water, by using the Become Ethereal shout before falling, or by being paralyzed on impact (most easily achieved by eating Netch JellyDB, Corkbulb RootCC, or Gold KanetCC).