This article is about the corpse in Hag's End. For the randomly encountered one, see Assassin. 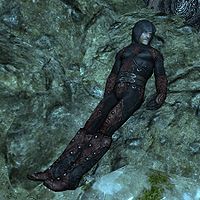 The Dark Brotherhood Assassin is a long-dead Nord bandit found behind a sliding wall in a hidden alcove revealed by pulling a handle behind the throne, in the throne room of Hag's End. Olava the Feeble will have a vision of his final resting place if you earn a bonus during the Dark Brotherhood quest Breaching Security. He is clad in a complete set of unique Ancient Shrouded Armor.