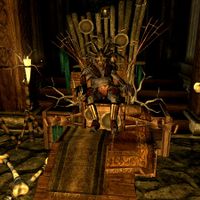 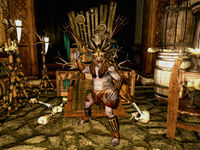 The Riekling Chief is the leader of the rieklings that attacked Thirsk Mead Hall and managed to kick out the proud Nord warriors and claim the hall as theirs. During the quest The Chief of Thirsk Hall, you will have to endure several tasks for the Chief, ranging from innocent errands to a massacre and an end to an ancient tradition.

The Chief will always be found in his throne, as rieklings never pause to eat or sleep. He will occasionally dance if you are successful with the tasks, but will otherwise remain seated. Only during the final stages of the related quest will he leave the Mead Hall, and participate in the mayhem involving the former inhabitants of the hall. Although he is a unique riekling, he carries the same items as the others, as detailed here.

When you get near Thirsk Mead Hall, you will find several rieklings standing guard out front. One of them will immediately ask you to head on inside. As you enter the hall, you will find the Riekling Chief seated in a homemade throne, talking to you: "You strong. Help tribe-kin." When asked who he is, he will respond: "You. You strong. Help tribe-kin." You can also ask where the tribe lived before they conquered the hall: "Tribe-kin live all places. All of world within great water." He will also explain why they took over the hall and he will reveal that even rieklings like mead: "Hot fire. Cold dizzydrink. Happy tribe." When he asks you to help the tribe, he will do a tiny dance, and you can ask him what is going on: "We family. We strong, you stronger." You can also ask how he learned to talk and the Chief will say: "Chief smart. Most Riekling dumb but chief smart." If you tell him the whole situation is too strange, he will respond: "No strange. Strong. You strong, make us stronger. Help tribe-kin." When you finally ask him if he could use some help, he will explain the first task, although it is incomprehensible: "Bilgemuck run. Prize beast, run. Fool tribe-kin, chase away. Bilgemuck fear. You bring, he follow you. Yes?" He will then elaborate: "Bilgemuck prize beast. You find, he follow. Bilgemuck love meat. Give meat, he follow. You go." With these words, the Chief will jump out of his throne, do a little dance, and the quest will initiate. After that he will only say: "Go. Find Bilgemuck." and "Where beast? See you, no see Bilgemuck. Go, go!" He will exit conversation with one of four farewells: "Farwag.", "Bru cha.", "Yuntar." or "Gelfek." 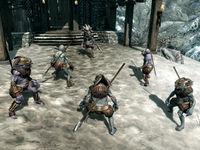 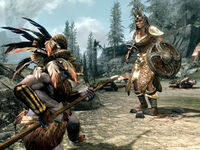 "Stab and run! The tribe-kin way."

Once Bilgemuck is back where he belongs, the Riekling Chief will not exactly be grateful, but will have a new task ready: "Bilgemuck follow you. Bilgemuck know strength. Tribe-kin stronger. You stay, help more." He will then explain: "Tribe-kin missing redgrass. Need for godspeak dance. You bring redgrass, we dance." When asked what 'redgrass' is, he will hand you some harvested scathecraw and explain: "Here, like this. Go, bring two hands of redgrass. Be friend of tribe-kin." As always, he will then get out of the throne, spin around, and jump back in. After that, he will be impatient: "Redgrass?, Wander, gather." When you return with ten samples of scathecrow, the Chief will dance in the throne and say: "Good redgrass. Later, we burn. Now, final task. Then, you tribe-kin." However, it turns out the Chief has violent plans: "Bad Nords. Say Thirsk theirs. Live by water, bother tribe-kin. We fight. You strong. You help. No more bad Nords." When asked if he really wants you to kill people, he will respond: "Bad people. They come, fight us. We fight back now." You can choose to express mixed feelings about killing the Nords, and he will persuade you: "You know. We know. Come fight. We wait, but you, come fight." After that, he will greet you with: "Be strong. Fight big ones." and "Stab and run! The tribe-kin way."

When you finally agree to do it, he will say: "We fight! Roo cha!" He will then jump out of the throne, and rush towards the entrance, followed by the other rieklings. Once outside, he will give the prep speech to his soldiers:

After the prep speech, the group of rieklings will draw spears and rush towards the unsuspecting Nords who are exiled in a small camp, Bujold's Retreat, east of Thirsk Mead Hall. Once there, they will attack the inhabitants with all they've got, with the Riekling Chief clearly in charge of the massacre. When there are no more Nords, the Riekling Chief will turn to you and reveal his suspicions: "You strong! All tribe-kin stronger with you. But... maybe you too strong. Too strong, want be chief." If you tell him you don't want to kill him, he will reveal riekling tradition to be similar to Orc tradition when he says: "Strong always fight strong. Old chief strong, me stronger. You stronger? Fight me!" If you instead choose to concur with him, and that you want to be the new chief, he will say: "Strong always fight strong!" In any case, the Riekling Chief will then proceed to attack you, with the inevitable result, making you the new chief of the riekling inhabitants of Thirsk Mead Hall.