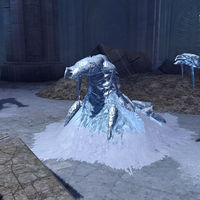 The Frozen Chaurus is one of the frozen creatures during the quest Touching the Sky. They cannot be attacked while frozen, but once they break out they are similar to regular chaurus, complete with poison spit. Upon death, they break up into ice shards and cannot be looted. They are only found in the temple, lining the path to Arch-Curate Vyrthur. During the end confrontation of Touching the Sky, several of them are released at once, which can lead to you being easily surrounded.