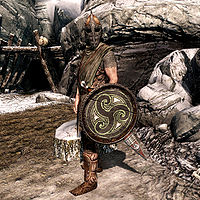 He has no unique dialogue and, in all respects, is just a normal guard.

This Skyrim-related article is a stub. You can help by expanding it.
Retrieved from "https://en.m.uesp.net/w/index.php?title=Skyrim:Hjaalmarch_Guard&oldid=1133963"
Categories:
Hidden categories: