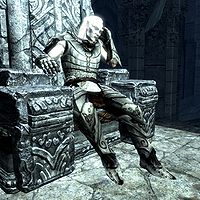 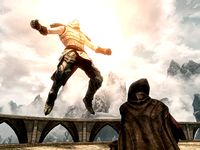 "Your pathetic powers are no match for mine!"

Arch-Curate Vyrthur is a Snow Elf vampire found in the Forgotten Vale. He is the brother of Knight-Paladin Gelebor and the only other uncorrupted Snow Elf. He created the prophecy which Lord Harkon is chasing in the Dawnguard questline, after having been forsaken to vampirism by Auri-El. He sought revenge through the corruption of Auri-El's influence on Nirn—his bow—which would have been achieved by dousing the artifact in the blood of a Daughter of Coldharbour, a being of the purest evil in Tamriel.

During the quest Touching the Sky, Gelebor asks you to kill Vyrthur in exchange for Auriel's Bow. He is found sitting on a throne in Auriel's Chapel. As you approach he will begin to speak to you about Serana.

Arch-Curate Vyrthur: "Did you really come here expecting to claim Auriel's Bow? You've done exactly as I predicted and brought your fetching companion to me. Which, I'm sorry to say, means your usefulness is at an end!"

He will then release the Frozen Chaurus to attack you. After defeating them, he will say:

Arch-Curate Vyrthur: "An impressive display, but a wasted effort. You delay nothing but your own deaths!"

He will then use his power to pull down the ceiling and release half the Frozen Falmer to attack you:

After defeating the Frozen Falmer, the now angry Vyrthur will say "This has gone on long enough." as he summons an Ancient Frost Atronach and releases the rest of the Frozen Falmer. During the fight, Serana remarks that his life will end here; however, he merely replies:

Arch-Curate Vyrthur: "Child, my life ended long before you were born!"

After defeating the Falmer and atronach, a now fearful Vyrthur will say:

Arch-Curate Vyrthur: "No... I won't let you ruin centuries of preparations..."

When Serana tells him to surrender and hand over the bow he will say:

He will then use all his power to destroy Auriel's Chapel with you inside and run outside to the Temple Balcony. Exhausted from using all of his power he will begin to talk to Serana, allowing him time to recover.

Recovering enough to resume the fight, he will once again attack. As you kill him, his final words will be "Farewell." or "Auri-El, forgive me..."