Speak to the Guildmagister, who says:

"As the premier research institution in the Empire of Tamriel, the Mages Guild employs a number of mystics and scholars all over the land. If we can get a representative of the Guild over to a place within a reasonable distance of here, the eminent scholar, (scholar's name), and [sic] has agreed to share (his/her) research. Would you be available for this?"

"The Mages Guild of (Guildmagister's town) has an exciting opportunity to benefit from the work of the renowned researcher and scholar, (scholar's name). (He/She) has agreed to donate some of (his/her) research to the Guild if we send someone to (scholar's town) to pick it up. Not surprisingly, (he/she) fears Necromancer intervention. I take it that you're as excited about this possibility as I am, (player's guild rank)?"

In truth, it is not the Necromancers who are after the research notes, but the Dark Brotherhood. If your reputation with the Brotherhood is less than or equal to ten, there is a 50% chance of getting a letter from them shortly after you start this quest. You should receive the letter at the latest one day after starting the quest. The letter reads:

If your reputation with the Brotherhood exceeds ten, you will always get a letter from them, with somewhat friendlier wording. You should receive this letter about thirteen hours after you started the quest at most. This letter says:

Travel to the town specified by the Guildmagister and locate the scholar, who says:

"You're the (player's race) the Mages Guild sent over to protect my work, yes? Marvelous to meet you, my child. Here's the bally thing. Good luck getting past those infernal Necromancers with it. I certainly couldn't." 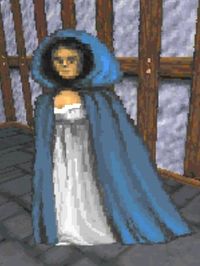 The Dark Brotherhood appreciates your assistance in this matter

If you want to accept the Dark Brotherhood's offer, travel to where the Brotherhood's contact is waiting for you. Ask around town until you know their location, enter the building and talk to the contact. Hand over the research notes, and the contact says:

"What a thoughtful gift. I hope your Mages Guild pals aren't too upset about losing it. What would they know about practical application of dry research anyhow? Here, take (random gold) gold for your trouble. Buy yourself something nice."

However, there is a 50% chance that the contact will also give you a fake copy of the original research notes, in which case they say:

"How kind. The Dark Brotherhood would gratefully offer you (random gold) gold pieces for your service. In addition, here's a little something I whipped together that should keep you from getting in trouble with (Guildmagister's name) and the other Mages Guildmembers. All research notes look alike anyhow. When they don't yield results, the Guild will just throw more assistants at it or give up the project in embarassment [sic]. The Mages Guild is simply a tedious pack of researchers who don't have to worry about gold and thus are never happier than when they are doing pointless work."

If you deliver these fake notes to the Mages Guild Guildmagister, you can still successfully complete the quest and receive your Mages Guild reward. If you are not given the fake notes, the quest counts as a failure once its time limit expires.

Return either of the two research notes and the Guildmagister says:

"Oh, this is brilliant stuff. I guess those damned Necromancers were not too difficult to handle, at least, not for you. Spiffing job, (player's guild rank)."

You receive a random amount of gold in return.

If you return any of the research notes to the Guildmagister, the quest counts as a success.

If you give the research notes to the Dark Brotherhood, you will gain reputation with them as shown below.

If you ask an NPC about the scholar, you may be told:

If you ask an NPC about the scholar when the Dark Brotherhood is involved, you may also be told: