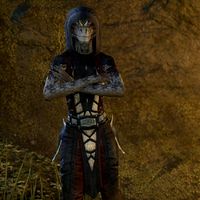 A Shadowscale, as seen in ESO
Hail to Sithis, blood's drop on blade's edge.
Before you, nothing. Behind you, the Void.
Catalyst, agitator, many-fanged maw.
Whisper your need to the Scales.
—Inscription found on an Argonian blade

The Shadowscales are an order of Argonian assassins originating in Black Marsh. Argonians born under the sign of the Shadow are taken at birth and offered to the Dark Brotherhood where they are trained in the arts of stealth and assassination. Any Shadowscale who lives to come of age is accepted into the Dark Brotherhood as a full member of the family.[1][2] They may also leave the Brotherhood to serve the Argonian people in Black Marsh.[3] They act with impunity there, and some are said to serve as personal assassins to a King of Black Marsh;[4][5] but no such king is thought to have ruled since the height of Argonian civilization in ages past—if at all—and the monarch's role as commander of the Shadowscales is said to be overstated.[UOL 1]

Many Shadowscales were opposed to the formation of the Ebonheart Pact in the Second Era, with some even turning traitor and fleeing Black Marsh.[7] However, some Shadowscales fought on the Pact's side during the Aldmeri Dominion invasion of Shadowfen in 2E 582 by liberating the town of Murkwater.[8]

With the closure of the training facility in Archon, and the death of the last known living Shadowscale in 4E 201, it is possible that the Shadowscales have been entirely wiped out.[9][10]