The eccentric founder of Tel Mithryn is master-wizard Neloth who works his few employees hard and expects them to carry out even the most unfair duties. His current steward is named Varona Nelas and is constantly challenged by the demanding wizard, who has a weak spot for tea brewed from canis root. Once you have spoken with Varona and left Tel Mithryn at least once, she will be nowhere to be found. Pay a visit to Neloth in his tower and he will wander around saying: "Where is that ash sucking steward of mine? Varona!" As it turns out, the wizard is quite hungry and will task you with finding Varona: "Well find her. Tell her I want apple cabbage stew, with some canis root tea." He will not take 'no' for an answer, regardless of which option you choose: 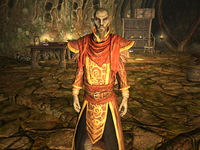 "Where is that ash sucking steward of mine?"

Why don't you just make your own tea?
"What? Make my own tea? I am a master wizard of the House Telvanni. Other people make tea for me."

Hey, I'm not your servant.
"Obviously not, or you would have a cup of tea in your hands. I supposed you want to be asked nicely. Very well. Please, oh hero of Skyrim. Please find Varona. I shall be ever so grateful."

Of course, Master Neloth. As you command.
"Finally. Someone who recognizes my importance around here."

Neloth will then return to his daily routine and you will have no choice but to search for the missing steward. No map marker will be provided, so look around for the other inhabitants of the settlement.

Outside, Neloth's apprentice Talvas Fathryon will refuse to talk about Varona until you complete his quest From the Ashes. Even so, he will point you towards local apothecary Elynea Mothren for information. Alternatively, you can talk to Ulves Romoran inside Tel Mithryn Kitchen. Both he and Elynea will tell you that Varona just departed for Raven Rock in order to gather supplies. Bringing this information to Neloth will net you nothing, as he only cares if his tea is hot or not. After speaking to Elynea or Ulves, a map marker will now point you towards Varona who will most likely (see bugs) be in the area west of the Sun Stone, not far from a dead reaver. Unfortunately, she never made it to Raven Rock as she was killed by three ash spawn, all of them still gathered around her dead body. Kill the ash spawn and investigate her body for a quest update.

Back in his tower, Neloth will have a hard time showing any emotion when you tell him the sad news: "Dead? Well that's annoying. How did she die?" When you tell him about the ash spawn attack, he will reflect a bit but will quickly get over it: "There are more and more of those things showing up around here lately. I suppose you'll have to find me a new steward. Try Raven Rock. They are in awe of me there. I'm sure almost anyone would be willing to serve me." Three options will be available and the two top options will always lead to the third: 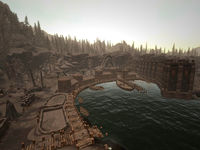 "Try Raven Rock. They are in awe of me there."

You can't just order me around.
"Well, somebody needs to get me a new steward. It might as well be you. But if you don't want to help a master wizard of House Telvanni, possibly earning his favor, you're a fool."

What's in it for me?
"So gaining the favor of a Telvanni wizard isn't enough? I suppose I'll have to pay you. Heroes. They get greedier every century."

What kind of a person should I look for?
"Hmm. Excellent question. Once word gets out, there will be a lot of people to choose from. Someone with a brilliant mind and robust physique that is blindly obedient would be ideal. Oh, and they need to know how to brew tea. Ulves always waters it down."

Once again, you will have to obey orders, so travel to Raven Rock, where a huge amount of the citizens will have an extra dialogue option, namely to consider a position as Neloth's new steward.

When you begin asking the inhabitants of Raven Rock if they want a new job as Neloth's personal steward, it soon becomes quite clear that the wizard may have overestimated both his reputation and popularity, as shown in the table below: 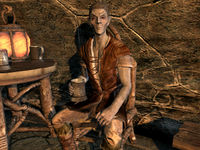 "There's got to be more to life than sweeping and cleaning all day."

While Neloth seems to be the laughingstock in town, three citizens will prove helpful and point you towards Drovas Relvi who works as a cook at the Retching Netch. These citizens are Dreyla Alor, Geldis Sadri, and Glover Mallory (see notes).

Drovas is quite unhappy with working at the Retching Netch, as Geldis Sedri doesn't allow him to drink on the job. When presented with the idea of acting as Neloth's new steward he will therefore accept right away: "Uh... you mean leave Raven Rock? For good? To go work for a crazed Telvanni wizard? Sure. Just let me get my things. On second thought, nevermind. I can get new stuff." Drovas will then set off at a running pace and head towards Tel Mithryn where he will begin his life anew, now a steward for Neloth. When you tell Neloth, he will hatefully comment: "That Drovas man? I suppose he'll do. He makes dreadful canis root tea though. But, I should be grateful. Here, take this for your efforts."

He will then hand you the reward, a leveled amount of gold and a key that provides free access to his unique Staff Enchanter in the locked southern chamber. The chamber also holds his Black Book, Hidden Twilight. Lastly, you can now hear the eccentric wizard calling for his steward: "Where is that lazy steward of mine? Varona! No, wait. She's dead. Drovas!"