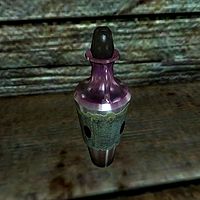 A bottle of skooma

Skooma is a narcotic made from refined moon sugar. Unlike in previous games, skooma has no negative effects, and drinking skooma will restore stamina for 25 points. It is technically illegal, but unlike in other provinces Skyrim merchants will not refuse to do business with you if you possess any, and will even trade skooma directly with you. Some NPCs (e.g. bandits) make comments that the skooma in Skyrim is "watered down" and not as strong as in other parts of Tamriel; this may be why it is less valuable than in previous games, and in fact worth less than the raw moon sugar used to make it.