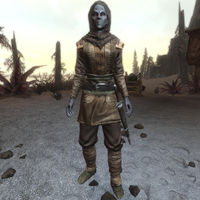 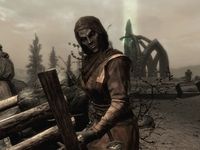 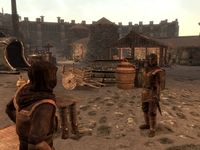 Bralsa begging in the market

Bralsa Drel is a Dunmer miner who lives in Raven Rock. She has fallen on hard times since Raven Rock Mine closed and has spent all of her fortune made in the mine on drinking, to the point where she was kicked out of the Retching Netch. During the quest Feeding the Addiction you will have to convince innkeeper Geldis Sadri to let her back in.

She is initially found at the Earth Stone where she works in a state of hypnosis while chanting the rants of Miraak. She will do this work around the clock until you free her and the other Raven Rock citizens from the spell by cleansing the stone. Once freed, she will return to her normal, albeit sad, existence in Raven Rock. Due to her drinking she even lost her home but has been allowed to sleep in the Abandoned Building which she does every night between midnight and 6am, right next to another poor soul, namely local beggar Rirns Llervu. After waking up she strolls around inside the house until 8am when the shops at the local market open up. She then spends the next eight hours at said market, trying desperately to get some gold out of her fellow citizens. At 4pm she returns to the abandoned house where she wanders around until her bedtime.

As you complete quests and Raven Rock starts to bloom again, Bralsa will see two major changes in her daily routine. Once you have reopened Raven Rock Mine during the quest The Final Descent, Bralsa will finally see her life get back on track and she will start working inside the mine again, every day between 4pm and midnight, although her thirst will conquer her new work: After helping her out during Feeding the Addiction she will enter the Retching Netch every day between 6pm and 10pm and down ale with the other regulars.

Bralsa wears a Dunmer outfit with matching shoes, and she carries a steel dagger and a selection of lower-class items and gold.

When you free her from Miraak's spell by using the Bend Will shout, a confused Bralsa will wake up and ask: "I lost my house, my family, my life... and then I lost my mind. How could it have gotten any worse?", before returning to her life as a beggar. She is aware of her downfall and will greet you with: "Don't pity me. And don't look at me like that. I know what I am." When greeted for the second time, she will tell a bit more: "I could swing a pickaxe better than any man in the mines. Made thousands of coins. Now it's all gone." Lastly, she will say: "How are you supposed to live when your only means of trade is yanked out from under you?" She will finish conversations with a piece of advice: "Don't waste your life like I did." When you talk to her you can mention that she seems to be in dire straits and she will tell you the full story: "I was one of the wealthiest miners in town... I could haul up almost three or four times what the average digger could. I never saw the end coming like it did... the mine running out of ebony. Unlike most of my fellow miners, I was too foolish to save enough coin for that day. The rest I spent on sujamma to drown my sorrows. Councilor Morvayn was kind enough to allow Rirns and I to live in one of the abandoned buildings. At least it keeps the ash out of our eyes."

Meanwhile, Bralsa will also be involved in a few quests she shares with most of the Raven Rock population. When local innkeeper Geldis Sadri wants you to promote his new batch of sujamma during the quest It's All In The Taste, Bralsa will be really excited and take it off your hands with: "The day I refuse sujamma from Geldis is the day I sprout wings and fly off of this rock." Also when you are supposed to find a new steward for Neloth during the quest Reluctant Steward she will have a quite unique response: "Would he give me skooma? I might do it for some skooma." However, it is not possible to give her any skooma (see notes) - you can only tell her that you don't have any, which will make her say: "Come back when you do." 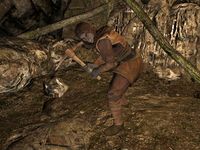 Like most other citizens in Raven Rock, Bralsa will experience considerable improvement in her life after you have completed the quest The Final Descent, thus reopening Raven Rock Mine and bringing back hope to the townsfolk. With a new future ahead, Bralsa will not only begin to work again, she will also start to greet you differently: "Look at me, I'm a different person. And I have you to thank for it." When asked about what she feels about the reopened mine, she will be excited: "Couldn't be better. The sections that are being opened up have revealed some huge deposits of ebony. Old Crescius has a nose for exactly where to dig. If they'd only listened to him years ago, the town wouldn't have been in such dire straits. At this rate, I'll be able to put a roof over my head in just a few months." She will bid you farewell with a happy: "See you in the mines!" 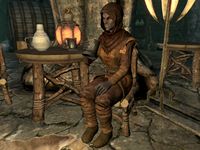 "If I want to spend my last bag of coins getting drunk, that's my business."

However, regardless of where she is in her life old habits die hard. When asked why you should pity her she will angrily respond: "Doesn't everyone pity the hopeless? Look at me... I'm no better than a beggar. I used to be a miner, a good one too. I made more gold digging up ore in a month than some people earn in a lifetime. When the mine dried up, I was lost. I have no other trade, so I spend my time drinking my fortune away at the Retching Netch... or I used to anyway." She will then explain what happened: "That fetcher Geldis won't even allow me inside. Said I was bad for business. If I want to spend my last bag of coins getting drunk, that's my business. What does he care?" If you tell her you are sorry to hear that, she will finish conversation with: "Sure, I bet you are. Everyone's always sorry." If you suggest you could talk to Geldis the quest Feeding the Addiction will initiate and Bralsa will say: "You can try... If you can get that stubborn mule to let me into the Netch, I'll make sure you get what's coming to you."

Enter the Retching Netch, locate innkeeper Geldis Sadri and ask him why Bralsa was banned from drinking at his inn. His explanation will reveal that he did it out of concern: "Have you seen the poor girl? She's a mess. She used to be richer than Councilor Morvayn and she's spending it all drowning her sorrow. As much as I love making coin, I can't watch her do that anymore. I won't." You can then choose between three options.

Once you have convinced the concerned innkeeper to let Bralsa drink again, return to her and tell her the great news. She will be quite sarcastic in her response: "Well then, I suppose I'm off to do what I do best. Here. This was something I carried around in happier times. Maybe you can find a use for it." She will then hand you an enchanted weapon of the best possible quality as a reward. After that, Bralsa can be found at the Retching Netch every day between 6pm and 10pm, doing what she does best.