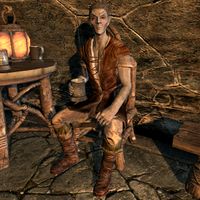 Drovas Relvi is a Dark Elf farmer who works as a cook at the Retching Netch in Raven Rock. He works for Geldis Sadri. He relocates to Tel Mithryn after completing the quest Reluctant Steward.

Drovas wears farm clothes and boots. He carries a steel dagger and a small amount of gold.

He often talks positively about the bar he works at, saying, "Welcome to the Retching Netch Cornerclub, milord/milady. If you need anything, Master Geldis will be happy to help you", "We have all sorts of authentic dark elf food and drink here. Geldis spares no expense" or "Geldis may be a tough boss, but I can put up with it. Keeps a roof over my head." It also seems that he had higher hopes for Solstheim, saying "I don't mind working at the Retching Netch, but I was hoping for a bit more when I moved to Solstheim. Ah well" or "There's got to be more to life than sweeping and cleaning all day." During Dragonborn, when asked about the shrine outside town, he'll give a dazed response, "Do you mean by the Earth Stone? There's a shrine there, but I don't remember what it's for..." When asked to elaborate, he'll keep rambling, "Well, I... You know, I can't remember. It's important, I think, but it's hard for me to think about." When asked if he knows someone named Miraak, he'll be unsure, "Did I know someone by that name? Someone... Someone that wanted something..." When asked what that means, he'll reply with "Maybe I'm just confused. I can't be sure." During It's All In The Taste, if you offer him some of Geldis' sujamma, he'll decline, saying, "Sorry, Geldis won't allow me to drink while I'm working at the Netch."

In the Retching Netch, he can be seen conversing with his boss, Geldis:

Geldis: "Drovas, I thought I told you I needed the jazbay crushed for my Emberbrand Wine. Where is it?"
Drovas: "We ran out of jazbay berries almost two weeks ago."
Geldis: "Damn it. I wish you would have told me sooner."
Drovas: "Sorry, boss."

Geldis: "Drovas! I need you to clean the rooms again. I went through there, and there's ash everywhere."
Drovas: "Sorry, boss. The ash comes in faster than I can clean it up."
Geldis: "Well, then you'll just have to clean them twice a day. Whatever it takes."
Drovas: "Yes, boss."

When Neloth finds out his old steward is dead, he sends you to Raven Rock to find a new steward. When asking around the following people will point you to Drovas, saying:

Dreyla Alor: "You could try Drovas Relvi. He came in here asking my father if he needed any odd jobs done. Seemed kind of desperate."
Geldis Sadri: "It would have to be someone pretty desperate. You might ask my apprentice Drovas. Lately he seems to be hard up for coin."
Glover Mallory: "As one Thieves Guild member to another? Try Drovas over in the Retching Netch. Not too long ago he tried to pawn some stuff off. Seemed kinda desperate for coin."†

†Glover Mallory will only recommend Drovas if Meet the Family has been completed.

When asked if he wants the job, he'll say "Uh... you mean leave Raven Rock? For good? To go work for a crazed Telvanni wizard? Sure. Just let me get my things. On second thought, nevermind. I can get new stuff." When you notice how eager he is, he'll say "Well, I've never been one to pass up an opportunity. Sorry to run, but I'm off to my new job." He will then leave the Retching Netch and Raven Rock for good, running all the way to Tel Mithryn to start his new job. If you try to converse with him when he's making the trip to Tel Mithryn, he will only say, "I'm off to take up my new position with Master Neloth."

When you tell Neloth that you found him a new steward, he will act indifferent about Drovas, saying, "That Drovas man? I suppose he'll do. He makes dreadful canis root tea though." If you ask Neloth about how Drovas is working out, he'll be slightly satisfied, but still complain about the tea, saying, "The man makes a dreadful cup of canis root tea. However, he seems to run the place well enough."

He seems happier with his new job, saying "After what you did for me, you are always welcome here. Just try to stay out of Master Neloth's way", "I can't thank you enough for setting me up as steward of Tel Mithryn" or "Neloth may be crazy, but it's better than staying in Raven Rock." He also seems to be working hard, saying, "Master Neloth certainly keeps me busy. Taking care of this estate is a lot of work." He also mentions his annoyance with canis root tea, saying, "I just can't seem to get the hang of making a decent cup of canis root tea." He also mentions Elynea making him some kind of sleep elixir, saying, "I hope Elynea has something to help me sleep at night." Surprisingly, if you've slayed a dragon outside Whiterun, he has heard about it, saying "I heard you fought a dragon. That must have been terrifying." You can now ask him how he's getting along in Tel Mithryn, to which he'll reply with "Neloth is a real task master. And the tea. The thrice damned tea! I don't think I'll ever learn to make it properly."

He can now also be seen having the following conversations with other Tel Mithryn residents:

Drovas: "Master Neloth, the silt strider traders just dropped off some supplies."
Neloth: "What did they bring? Books? Soul gems?"
Drovas: "Mostly books. There were a couple of soul gems, some ingredients for Elynea, and some strange wood."
Neloth: "Ah! The wood is for the staffs. Put them away when you get a chance. But don't get in my way."

Drovas: "How are your ears, Talvas?"
Talvas: "They're back to regular size. It didn't hurt nearly as much this time."
Drovas: "I don't understand why you let him do these things to you."
Talvas: "Master Neloth is the most powerful wizard of House Telvanni. Maybe the most powerful in all of Morrowind. Someday I will inherit all of this. It's worth a little pain."

Drovas: "Do you ever get lonely out here in the middle of nowhere?"
Elynea: "You complain too much. Tel Mithryn is the safest place in Solstheim. Only a fool would challenge Master Neloth."
Drovas: "I suppose you're right. At least here I'm safe from Mogrul."

Elynea: "I miss Varona. She used to help me with the gardening."
Drovas: "I can't help it if I have a black thumb. It's like the mushrooms hate me."
Elynea: "It's not your fault, Drovas. You do other things well. Varona was never able to do the repair work that you do."
Drovas: "Thank you. I didn't mean to be so defensive. I know Varona was your friend. It's okay to miss her."

After setting Drovas up as steward, when you head back to Raven Rock, Mogrul will approach you saying Drovas owed him one-thousand septims, and that since you were the one to make him untouchable, the debt is now yours. You can now ask Drovas if he owed Mogrul money, in which he'll reply "Uh...Well, sort of. I owed him a thousand septims, but not any more. He doesn't dare try to collect now that I'm Neloth's steward." If you tell him that now the debt is on your hands, he'll apologize and say "Wow. Sorry about that. He's never going to stop you know. He'll keep sending thugs after you until either you pay him or kill him." If you ask why doesn't he just pay the gold, he'll say "Pay him? Why? I mean, I don't have the money. Well, I might soon. Neloth does pay well. But the important thing is that I don't have it. In fact, it's not likely I'll ever have it. Expenses you know. Sorry about the thugs and Mogrul and everything." If you exit the conversation now and once again ask him if he owes Mogrul money, he'll say "I already told you, Mogrul can't touch me now. Whatever is between you and Mogrul is your problem." You'll now only have option to persuade, telling him to pay you. If you fail, he'll say "I don't see why. He's your problem now." but if you succeed, he'll say, "Well... I... Oh, fine. Here. This is all I have" and then proceed to hand you two-hundred fifty septims. During the quest, when exiting conversation, he may say "Mogrul isn't someone you can ignore." After the quest, if you paid off his debt, he'll express his gratitude, saying "I heard you paid my debt to Mogrul. I don't know how I can every [sic] repay you." If you take the more violent approach and kill Mogrul, he'll be elated, saying "I heard Mogrul is dead. That is a relief!"