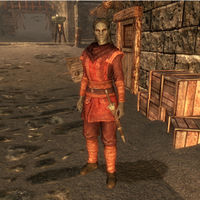 Aphia Velothi is a Dark Elf priestess living in Raven Rock. She offers common-level training in Restoration. She used to be a Temple priest, which is how she met Crescius Caerellius, who was brought to her for care while he was overcoming depression. She eventually married Crescius, and left the Temple over a disagreement with Elder Othreloth regarding the current status of the Tribunal (Othreloth refers to them as the "false Tribunal"), and she is no longer welcome there. She is worried her husband's obsession with his great-grandfather is going to get him killed.

Aphia carries a key to Crescius' house, among other things, and wears a Dunmer outfit and Dunmer shoes. If attacked, she defends herself with a steel dagger. She knows the Restoration spell Healing.

"Why you're leading Crescius on, I'll never understand."
I'm guessing you don't agree with Crescius's story.
"Poor Crescius is aging and I believe it's addled his mind.
As the years have passed, it's gotten worse. He's become obsessed with his theories of conspiracy."
Then where's his great-grandfather?
"I'm sure he's down there somewhere, buried under a mountain of rubble like the East Empire Company claims.
My greatest fear is that my stubborn mule of a husband will end up suffering the same fate."

Do you want to be the new steward of Tel Mithryn?
"Me? I hardly think so.
That Telvanni wizard is unhinged. I heard he tries to drink the ash."

Geldis Sadri wants you to try his new drink.
"Well that sounds lovely. Thank you."

When spoken to after hearing the argument between Aphia and Crescius:

"My apologies for Crescius's ravings."
What were you arguing with Crescius about?
"That foolish old man thinks he's thirty years younger than he is. He's going to get himself killed traipsing around the mine."
Why is he exploring the mine?
"He's convinced himself that there's some sort of conspiracy involving the East Empire Company and the mine's closure.
We came across some old letters that belonged to his great-grandfather in our house and he believes every word written in them."
What did the letters say?
"Crescius's great-grandfather worked for the East Empire Company. The letters mention some sort of discovery he was sent to investigate.
There's really nothing remarkable in the letters. I don't know what he's so excited about."
Who was Crescius's great-grandfather?
"Gratian Caerellius.
He was an explorer for the East Empire Company. They'd send him all over Tamriel when they had difficulties in a mining operation.
Poor man... can you imagine doing all that dangerous work just to end up dying at your own doorstep?"
What happened to him?
"There was a horrible accident, and he was killed when one of the tunnels collapsed. They were never even able to go down there and recover the body... the East Empire Company sealed that section off to prevent any more tragedies. Crescius is convinced it's a story cooked up by the company to cover up something else, but I don't know."
You don't agree with Crescius?
"My beloved is almost eighty years old and I think the shock of finding one of his ancestor's things has left his mind a bit... confused. I love him dearly, and I support everything he does, but I can't let him chase this silly idea or he may end up joining Gratian in a rocky grave."

She can be asked about how she met Crescius:

How did you meet Crescius?
"To understand how we met one another, you have to appreciate what he's going through. Crescius is a third-generation miner... all his life, he's lived and breathed nothing else. By the time Crescius came of age, the ebony mine in Raven Rock was shut down. He took that quite hard."
Why didn't he move somewhere else to find work?
"Our home has been in his family for over two hundred years. Leaving would have been like abandoning precious memories.
Instead, he stayed on Solstheim and spent most of his life prospecting for a new ebony source. Sadly, it never surfaced.
A decade ago, this drove him into a deep depression. He shut himself inside his home and refused to come out."
This is where you met?
"It was. After refusing to allow anyone to bring him food, Councilor Morvayn ordered his door to be knocked down before Crescius starved to death.
I was a Temple priest at the time, and they had me use my healing arts to restore strength to his ailing body.
I stayed for a while and cared for him, then... I suppose we fell in love."
You're a priest at the Temple?
"Far from it. In fact, I'm no longer welcome there."
Why?
"In all honesty, it came down to a disagreement between what I believe and what Elder Othreloth believes.
I'd prefer not to get into the details, but let's just say our opinions about the current status of the Tribunal vary widely."

"Don't be put off by my husband's mood... he enjoys having visitors."
"Allow me to apologize for Crescius's behavior, I'm afraid he hasn't been himself lately."
"It's been tough running the household alone, but Crescius isn't getting any younger."
"Those East Empire people should be ashamed of themselves for abandoning Raven Rock."
"I don't know what you did in those mines, but it put a smile on Crescius's face. I've never seen him so happy." (Once The Final Descent is complete)

When you first enter Crescius' house:

Crescius: "Damn it, woman! I said to leave me be!"
Aphia: "Crescius, last time you explored the mine you almost fell to your death. I'm not spending the rest of my days as a widow!"
Crescius: "And I'm telling you that I'll do whatever it takes to find my great-grandfather's remains. He's down here, I can feel it."
Aphia: "That was almost two centuries ago. There may be nothing left to find."
Crescius: "Just let me go, woman!"
Aphia: "Crescius, you're an obstinate old fool and you're going to get yourself killed."