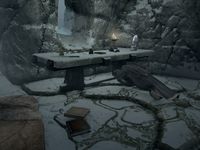 A young mage has perished, her work uncompleted

This quest will automatically begin upon installing the Arms of Chaos Creation. You will hear rumors of strange rituals taking place at the Skytemple Ruins north of the College of Winterhold. The ruins are usually swarming with undead skeletons, although these shouldn't pose much of a threat. You must locate the corpse of Hyenril, a dead mage found within one of the ruins. On the table in front of her, you will find Hyenril's Journal along with two broken staves: the Arm of the Moon and the Arm of the Sun. Hidden beneath the table is the Warlock's Mark, a mundane necklace.

Reading the journal will identify these items as the property of Hyenril's former master, Ellane, who spent long years attempting to restore the two staves, which were originally created in imitation of the legendary Staff of Chaos but were destroyed by their original creator. It will also reveal that Sigil Stones will be needed to restore the three items and unlock their true power. Take all three items to progress the quest; the Warlock's Mark is small and really can be difficult to see, so you may need to rely on your HUD pointer. 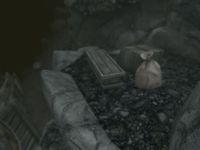 In order to obtain the required Sigil Stones, you will need to track down Ellane's ring of summoning. Unfortunately, Ellane was still wearing this ring when Hyenril shipped her body back home for burial aboard a vessel called the Sea Stallion. Your first stop is the East Empire Company offices in Windhelm, where you will find a letter entitled Loss of the Sea Stallion on a table next to a potion of waterbreathing. The ship apparently sank to the bottom of Pilgrim's Trench off the coast of Skyrim before it delivered its cargo.

Head to Pilgrim's Trench and prepare for a deep dive to find Ellane's coffin, which can be found atop a rocky outcropping on the sea floor. Inside you will find a copy of Final Lesson, Master Ellane's Last Words, and the Sovereign Band, an enchanted ring which fortifies your magicka.

The Guardians of the Sigil StonesEdit 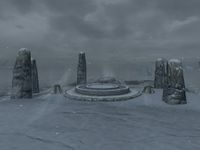 With the ring in hand, you will be directed to a stone Daedric summoning circle on the same island as Skytemple Ruins. You must descend from the peak where the ruins are located and go to the eastern shore of the island to find it. Approach the center of the altar and you will be given the option to summon Daedra. Once you activate it, three Dremora will appear in quick succession, with a new one being summoned each time you defeat the last:

Should you survive the encounter, loot the bodies of the Dremora to obtain the three Sigil Stones needed to restore your items' enchantments. The Warlock's Mark can be reforged at any forge or anvil. The Arm of the Moon and Arm of the Sun require access to a Staff Enchanter; in the base game, the only one in existence is located behind a locked door in Tel Mithryn and can only be accessed after you complete the quest Reluctant Steward. You can avoid this prerequisite if you have access to a Staff Enchanter elsewhere, such as the one added by the Myrwatch Creation.

Once you have crafted the enchanted versions of all three items, the quest will complete and you will have in your possession several powerful artifacts.