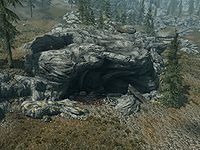 Greenspring Hollow is a shallow cave located northwest of Whiterun, near Dustman's Cairn. The cave is located under a rock overhang. It is the den for a vicious leveled animal, often a sabre cat even at low levels.

As you approach the outcropping, a single predator will likely attack you. Once it is dealt with, you can safely check out the creature's den. From the look of things, a foolish hunter decided to camp here and paid with his life. His body can be found in the middle of the blood-splattered ground, next to a fallen cooking spit. Some skeletal remains, which can be looted, can be found further back next to two unusable bed rolls.

The hunter's lean-to has a total of ten pelts of various animals. There is an apothecary's satchel, a small coin purse, and a bear trap near the lean-to. A leveled-locked chest lies at the back of the outcrop. A copy of the book Argonian Account, Book 2 rests on a boulder beside the chest, with a random bow next to it.

On the left side of the outcropping is a tanning rack. A leg of goat, a piece of horse meat, and some venison can be found hanging from the ceiling on a rope. Several fungi growths can be found around the camp, namely two clusters of fly amanita, a Namira's rot, and an imp stool fungi.

Follow the nearby stream to locate a nirnroot and a gold ore vein at the lake's shore. You may encounter a few more predators in the area as well.