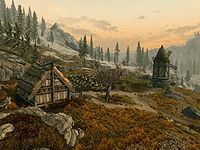 Loreius Farm is a small farm in the Pale, north of Whitewatch Tower.

It is home to Vantus Loreius and his wife, Curwe. Like other farms, the farm can provide fresh produce, and you will not incur any bounties for harvesting the plants here.

The farm is set back from the road with a path leading up to the single story farmhouse. The farm boasts a windmill that powers a grain mill. Behind this are two large fenced fields. The first one holds six bushels of wheat, fourteen potato plants, sixteen leeks and nine cabbages. The other is where the animals live and where the chicken nest is located. There are several food sacks inside the mill and a couple of food barrels just outside the fields, by the fence. The front of the house has a fenced deck with a couple more barrels of foodstuffs at one end and a chair at the other. Around the farm are five tundra cotton plants. The front door is novice locked most of the time.

The house is a single room dwelling with a set of shelves immediately on the left as you enter. These hold two leeks, a garlic bulb, five potatoes, and four common books Several pieces of cheese, two chicken's eggs and a pine thrush egg lie on top of the shelves and three bunches of dried elves ear, two garlic braids and a bunch of frost mirriam hang from the ceiling above. To the right is a food barrel and coming out from the southeast wall is an owned double bed with an unlocked chest at the foot of it. A round wooden table sits to the right of the bed with two bottles of Black-Briar mead and a common book on top. Against the southwest wall is a wardrobe containing clothes and a hanging rack to the right holding three rabbits.

Opposite the door on the southwest wall is a fireplace with a cooking pot on a stand in front, while on the mantelpiece is a steel sword. To the right of the fireplace is a long wooden table and bench with two bottles of alto wine, two bottles of Nord mead, two pine thrush eggs, a cabbage, several loaves of bread, a salmon steak, a potato and a sprig of snowberries on top and a potion of extra magicka on the floor underneath. Finally, in the northern corner is a small square wooden table with two bottles of alto wine, a bottle of wine, a medium coin purse and five loose septims on it.