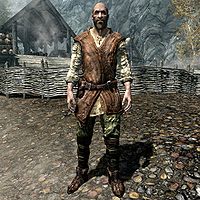 Klimmek is a Nord citizen and a resident of Ivarstead. He's sharing his house with Bassianus Axius, who was looking for a job and a place to live, both currently working together as fishermen. However, they don't get along very well. Klimmek thinks Bassianus is spending too much time coming up with new ideas to make profit instead of actually fishing. On top of that, they both apparently fancy the same girl, Fastred, with whom Bassianus is planning to leave to Riften—although it doesn't seem Bassianus is aware of his housemate's feelings towards his girlfriend. During The Book of Love, you can choose to help Klimmek convince Fastred to stay in Ivarstead.

Klimmek also supplies the Greybeards with food from time to time. Due to his age and the difficulty getting to High Hrothgar, he's hesitant to make the next delivery. He'll mention this when he greets you with: "I wish I could make my deliveries more often, but the road's getting dangerous." and "7,000 Steps indeed... next time they need to build it closer to the ground..." Similarly, ending the conversation leads to:"Welp [sic], time to gather more supplies I guess." You can start the quest Climb the Steps by offering to make the delivery in his place.

He wears a set of farm clothes and a pair of boots, and carries around a belted tunic for sleepwear. He is equipped with a leveled dagger which can be up to elven quality, and carries a key to his house, as well as a selection of common loot and gold. Initially, he'll be found on the bridge leading to High Hrothgar, waiting for you to trigger his conversation with Gwilin, which will be achieved by approaching them. When the conversation ends, he'll get to his usual daily routine.

He wakes up early in the morning at 4am to have breakfast with Bassianus for an hour. On weekdays he goes fishing at 5am at the Treva River, standing at the water's edge south of the lumber mill. At 1pm, he heads over to the Vilemyr Inn to have lunch for an hour, then afterwards gets back to fishing. After four hours, he'll head back to the inn for a one hour dinner. He returns to fishing for another four hours, finally going back to bed at 12am to have a short night's sleep. On weekends however, he stays home instead of going fishing.

Like most citizens of Ivarstead, you can ask him what he knows about High Hrothgar, to which he admits: "I've been to the monastery many times, but I've never even laid eyes on one of the Greybeards. Not that I'd care to. Being masters of the Thu'um, they could kill you by uttering a single word. Well, not that they would. They seem peaceful, but I wouldn't want to provoke them." 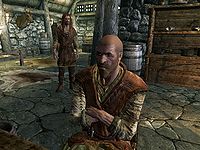 "I'm becoming sick to death of your ideas."

When they're at home or in the inn, you can catch Klimmek and Bassianus having an argument:

Klimmek: "We're behind again. I need you to catch another two bushels by week's end if I'm to make another delivery."
Bassianus: "Blood from a stone, Klimmek. I've been out there every morning. They just aren't biting."
Klimmek: "Come on, everyone in town knows that you spend more time with Fastred than fishing in the river."
Bassianus: "That's none of your business and I appreciate if you wouldn't mention it again."

Bassianus: "If you have a moment, I've come up with a few ideas I wanted to share."
Klimmek: "I'm becoming sick to death of your ideas. Not one of them has paid off since you moved in."
Bassianus: "Look, I'm merely suggesting a few things that could expand our business."
Klimmek: ""Our" business? As I remember things, it was you that showed up at my doorstep looking for a job and a place to live. Try and remember that."

Klimmek convinced himself he isn't good enough for Fastred. It would be no surprise to feel lonely in his shoes, and as such, he can sometimes be found trying (and struggling) to ask bard Lynly Star-Sung on a date when he's visiting the inn, only to be kindly rejected:

Klimmek: "I thought you played wonderfully last night."
Lynly: "Thank you Klimmek. That's too kind."
Klimmek: "Perhaps when you're finished here this evening, we could..."
Lynly: "You're sweet. I'm just not ready for that sort of thing right now. I'm sorry."

The first time you see Klimmek is on the bridge leading to the steps to High Hrothgar, where he's having a chat with Gwilin about his delivery. This is your first hint towards starting Climb the Steps: 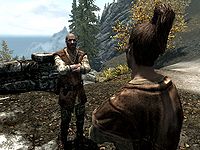 "I'm just not ready to make the climb to High Hrothgar."

Gwilin: "On your way up the 7,000 Steps again, Klimmek?"
Klimmek: "Not today. I'm just not ready to make the climb to High Hrothgar. The path isn't safe."
Gwilin: "Aren't the Greybeards expecting some supplies?"
Klimmek: "Honestly, I'm not certain. I've yet to be allowed into the monastery. Perhaps one day."

After the conversation, Klimmek returns to his usual business. Everyone in town knows about his trips to the monastery, and as such, the busybody innkeeper Wilhelm may inquire about Klimmek's next trip when he's visiting the Vilemyr Inn:

Wilhelm: "You heading up to High Hrothgar soon, Klimmek?"
Klimmek: "I wish I didn't have to. It's quite a difficult climb."
Wilhelm: "Take your time then. It isn't as though the Greybeards are going to complain."
Klimmek: "I know, but I don't want to let them down. I guess I better start thinking about it soon."

Klimmek has been holding off on his delivery because he feels his body can't cope anymore. Nevertheless, this task is important to him, putting a weight on his shoulders as he believes he'll have to make the climb sooner or later. This is apparent when you approach him, when he asks: "Passing through on your way to High Hrothgar? About to make a delivery up there myself."

You'll be able to hear him out about it when you ask him what type of deliveries he makes to High Hrothgar: "Mostly food supplies like dried fish and salted meats; you know, things that keep fresh for a long time. The Greybeards tend not to get out much, if you catch my meaning." When you ask him what they'll give him in return, he admits: "Well, it's kind of an understanding between us. I mean, it just wouldn't feel right to charge them for a bit of preserved food. Trouble is, my legs aren't what they used to be and climbing the 7,000 Steps takes its toll." You'll be able to propose doing it for him at this point, which will relieve him of his burdens: "Really? That would be kind of you. Here, take this bag of supplies. At the top of the steps you'll see the offering chest. Just leave the bag inside and you're done." If you simply tell him you can't help him, he'll continue by pondering about what to do: "Maybe I'll hold off and go another day. Get some rest first."

When he's given you the supplies to deliver, you can ask him what to expect on the way up to High Hrothgar: "Well, there's the occasional wolf pack or stray, but that's all I've ever had to deal with. Shouldn't be a problem for the likes of you. Other than that, watch your footing. In these wintry conditions, the stairs can be treacherous." In truth, the path up is far more dangerous than the occasional wolf. Depending on your level, you may encounter ice wolves, frostbite spiders, bears (all variations), ice wraiths, and even frost trolls of which one is guaranteed. It's only justified when he takes his leave with: "Be careful up there."

You can return to Klimmek after having put the supplies in the chest outside High Hrothar, and he'll joyfully greet you: "Ah, good to see you again! How did that delivery go?" When you tell him you've successfully delivered them, he'll remark: "Quite a climb, wasn't it? Anyway, much appreciated. Here, take this for your troubles.", which is when he gives you a leveled amount of gold. After this, the first thing he'll say when greeting you is thanking you again: "Thanks again for delivering those supplies to the Greybeards." He will similarly end the conversation with: "Thanks again for the legwork."

Your first task during The Book of Love is to help Fastred with her love problems. She'll tell you that she's looking to move out of Ivarstead with Bassianus Axius. However, by doing a little digging you'll find out Fastred's intentions are more complicated than that, as her emotions seem to be running high due to her young age. You'll already be able to tell her she seems confused when she's asking you to help her out, to which she admits her uncertainty: "I don't want to choose! They're both so amazing."

While Bassianus visits the inn during the day, innkeeper Wilhelm can sometimes be found confronting Bassianus about his plans with Fastred:

Wilhelm: "Have you spoken to Fastred yet?"
Bassianus: "No. I'll tell you, Wilhelm, if I could sweep her away from here tomorrow I'd do it, but Klimmek still has so much to learn."
Wilhelm: "Klimmek is doing just fine. You should follow your heart."
Bassianus: "Perhaps one day, but not today."

If you speak to Fastred's father, Jofthor, he'll tell you her feelings are but a phase and aren't to be taken seriously, as he admits: "Until a few months ago, the girl was head over heels for Klimmek. Wouldn't stop talking about him. Now if I thought she was really in love with Bassianus, that would be one thing. But she's a child. It will pass." Further questioning shows Jofthor seems aware of Klimmek's feelings for his daughter, and seems to prefer Klimmek over Bassianus, presumably because Klimmek has no plans to leave Ivarstead: "And like always, the boy lacks any kind of spine. He'll need some convincing. A little push and this would all be simpler."

When you talk to Klimmek, you'll now be able to mention you've heard he lost Fastred: "Oh, Fastred. I'm not sure what happened. One moment she's smiling at me, the next I can't even meet her eyes. I'll bet Bassianus would know what's going on. He understands women." If you just state there's not much you can do about it, he'll agree: "I guess not." However, you can follow Jofthor's advice by giving Klimmek a subtle push by saying Fastred likely prefers assertive men, though he seems to misinterpret your intentions entirely: "What did you call me?" If you continue being subtle and say you think Fastred would want a more cultured man, Klimmek still doesn't get the hint: "If that's what she wants, then that's what she'll get.", implying Bassianus is the cultured man she needs. Or instead, realizing you'll have to be clear, you can explain how he has to be more bold, which will take him by surprise: "Wait... you mean I should just... tell her? Tell her how I feel?" When you ask him what he has to lose, you'll open his eyes as he realizes one always loses without trying, coming up with a fisherman's metaphor: "Ysmir's beard, you're right! No fish was ever caught by staying away from the shore. I'm off to see her!", after which he immediately runs up to Fastred to declare his feelings: 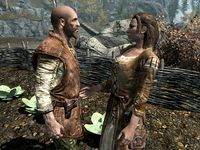