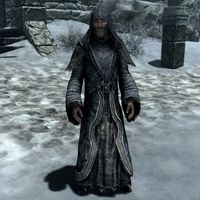 Borri, an elderly priest, is one of the reclusive Greybeards in High Hrothgar who refuses to speak, lest a mere whisper of their voice unleashes destruction. Borri teaches you a word of the Whirlwind Sprint shout during The Way of the Voice. He will react when interacted with, greeting you with a muttered "Dovahkiin" and causing the surroundings to rumble in doing so.

Borri wears a set of Greybeard's robes with the matching hood and boots. He carries a flute, one sample of ice wraith teeth, an amulet of Talos, and one sample of snowberries.

Aside from his greeting to you, the only other word ever heard by Borri is the shout "Bex!" during the quest The Way of the Voice. The shout in English means open.