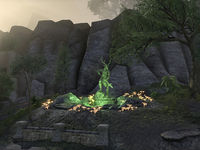 Entrance to March of Sacrifices

The March of Sacrifices is a dungeon shaped around the theme of Hircine's Great Hunt. It is part of the Wolfhunter DLC, along with Moon Hunter Keep.

The entrance can be found at a Hircine statue southwest of Serpent's Grotto in Greenshade.

The following item sets will drop in the dungeon: Hanu's Compassion, Blood Moon, Haven of Ursus, and Balorgh.

Throughout the dungeon are three hidden Golden Indriks who, if defeated, will each grant the group a unique boon. These boons offer bonuses that can help overcome the mechanics of later boss battles.

In order to find a Golden Indrik, you first need to find three mysterious plants or items dotted around the dungeon. When near the item, you will hear a low, pulsing chime. Activating the mysterious item will spawn a Hunting Wisp. Follow the wisp and it will take you to an opening, which leads to a stealth section. Continue following the wisp and activate the synergy to reveal a Golden Indrik. Once it is defeated, your group will gain the boon. This can be completed after defeating the dungeon's final boss.

The first item will either be a "Mysterious Brush" found near the village area after the Wyress Sisters or a "Mysterious Backpack" within one of the houses, which glows with a blue light. Its Indrik will grant the Boon of Ferocity:

The second is "Mysterious Mushroom" and is found in the wispmother forest area, after Aghaedh of the Solstice. Its Indrik will grant the Boon of Prowling:

The third is "Mysterious Dirt" and is found shortly after Tarcyr, but before the final boss. Its Indrik will grant the Boon of Hardiness:

The first boss of this dungeon is a group of three sisters. The primary mechanic in this fight is keeping the three sisters apart from each other and adopting a divide-and-conquer approach. Each sister is surrounded by a colored aura that grants them a unique buff. However the aura also acts as an AoE, meaning the sisters can grant each other their buffs if they are in close proximity.

Wyress Rangifer (Healer)
Wyress Rangifer serves as the healer of the group and is surrounded by a yellow aura. Her AoE buff grants increased healing to her nearby sisters.
She may also use a healing beam that tethers to her sisters and a ground AoE healing effect.

Wyress Strigidae (Archer)
Wyress Strigidae is the archer of the group and is surrounded by a blue aura. Her AoE aura debuffs players with the Silence effect, which blocks magic abilities, ultimates and synergies. Her arsenal includes a channeled Snipe attack which inflicts massive damage unless it is interrupted or blocked. She may also occasionally teleport strike a random player.

Wyress Ursus (Sword and Shield)
Wyress Ursus serves as the tank of the group and is surrounded by a green aura. Her AoE buff grants increased resistances to her nearby sisters. Her arsenal includes a channeled heavy attack which inflicts massive damage unless it is interrupted or blocked. She may also occasionally charge at a player, knocking them back and doing moderate damage to them.

When one sister is killed, an animal aspect of them will spawn with her aura still in effect. The animal aspects will gravitate towards their closest living sister and grant that sister the buff. 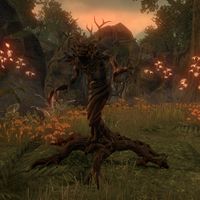 The second boss is a large Spriggan with four smaller Spriggans, named Sapling of Seasons, surrounding it. The Saplings have different colored AoEs associated with them, which each have different effects:

In addition, a few Stranglers will spawn on the outskirts and use their spit attack which inflicts damage and applies a snare that gradually increase with every hit.

The primary mechanic in this fight is when Aghaedh summons four Lurchers - each in a color matching a Sapling's AoE. When a Lurcher is killed they drop a colored orb of light that must to be picked up with the Synergy buttons. All four Lurchers must be killed and each player in the group must pick up their own orb. If the Lurchers are not killed before Aghaedh begins her next phase, they will be enraged and increase their damage.

The boss will enter a phase where she begin channeling her Wild Shot ability. To avoid being killed from this powerful ability, each player must stand in the Sapling's AoE that matches the color they picked up. This will repeat until Aghaedh has been defeated.

The primary mechanic of this fight is a "hunting phase" that is interjected throughout the battle. This phase requires the players to break the stealth mode of the boss so it can be attacked. This phase occurs at the start of the battle and when the boss' health percentage falls to 80%, 55% and finally 20%.

When first entering the arena, a heavy fog will be flowing all around you and the boss will be completely hidden. The group is required to crouch into stealth mode in order to proceed. Failure to enter stealth mode or having your stealth interrupted by one of the roaming phantom indriks will cause you to teleported into the air, resulting in a short fall the inflicts fall damage. Failure to maintain stealth three times in a single hunting phase will result in a fatal drop.

During the hunting phase a friendly wisp will be roaming around the arena. When the wisp lands at a location, it'll emit a green AoE around it. Players must go to that wisp and activate the Synergy prompt. This must be done three times for each phase. The third synergy activation will reveal the boss so that it may be attacked as normal.

Every additional hunting phase will result in more varied threats. Stampeding Indrik, frost AoEs, fire projectiles and a frost AOE that spawns on two random players and sticks on them.

There are two primary mechanics in this battle. Continually moving the fight between the shallow water and small islands, and overcoming a fog phase where the boss becomes enraged.

During the battle, Balorgh's ground slam that will cause poisonous spores to spawn on the three islands, which causes AoE damage and forces the group to move the fight into the water. Balorgh will later activate his lightning attack that will electrify the water, forcing the fight onto the islands. This back-and-forth positioning will persist throughout the fight.

Later in the battle, the arena will be covered in a dark swirling fog and a random player will receive a special AoE under their feet. This AoE mark makes them the primary target of the now-enraged Balorgh. A blue pillar of light will spawn somewhere in the arena a few seconds after the initial fog appears. The targeted player must kite the boss through the blue pillar of light in order to dissipate the fog and deactivate Balorgh's enraged mode.

There are several achievements associated with this dungeon: