Vykosa the Ascendant is a Khajiit Werewolf Lord and the leader of Moon Hunter Pack, a group of werewolves who have infiltrated Moon Hunter Keep. She serves as the dungeon's final boss. During the fight Vykosa is assisted by her powerful Dire Wolf companions Ary and Zel. 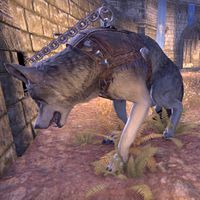 When Ary and Zel are engaging the players, Vykosa equips her inferno staff and stays in one position in the back of the arena.

Ary and Zel must be burned down first if you want a smooth fight, as if left alone for too long, they will Pounce, causing massive damage to a random player. When fighting either in melee range, be sure to dodge or block their Lunge attack, which is indicated by a red cone and block telegraph. The strategy for this is for the tank to taunt one wolf and drag it to Vykosa. The other will be forced near the wall due to their shared chain. For example, if the tank takes Ary to Vykosa, Zel will be forced to stay near the wall.

When werewolf adds spawn, Vykosa will engage in unarmed combat and move from her position.

At 90%, 70%, 50% and 30% health, two werewolves will spawn to attack the party. They deal ???[verification needed — upcoming rebalance to their amount of damage dealt pending] damage and should be killed quickly to simplify the fight.

Slash
A basic melee attack that deals minor physical damage.
Rending Slash
A charged heavy attack that deals high physical damage. This must be blocked.
Brutal Pounce
The boss leaps on far away targets dealing moderate physical damage and snaring them.
Claws of Torment
Getting hit by Slash deals moderate disease damage over time.
Deafening Howl
The boss howls dealing moderate physical damage over time around herself as indicated by a red circle. This aura also buffs nearby werewolves causing them to deal more damage.
Primeval Roar
The boss shouts stunning all targets in front of her.
Devour
If one of the players in your group is killed during the fight, Vykosa can Devour the dead player's corpse and slowly regain health. This ability can be interrupted.

At 20% health, Ary and Zel will break free from their chains. The group should save ultimates to burn the boss down once this happens.

Summon Accursed Werewolf
At 85, 65, 45 and 25% health, three more werewolves will be summoned.
Summon Stranglers
At 70% health, stranglers will spawn at the edge of the arena dealing minor poison damage to any players near them.
Summon Shock Wardens
At 50% health and below, Shock Wardens will spawn with the werewolves at the corresponding health percentages. They will enrage the boss just as in the earlier encounter and must be killed quickly.
Summon Archivist
At 30% health, the ghost of Archivist Enarde will appear in the middle of the arena. He cannot be damaged. Instead, he will occasionally use Shock/Shock Blast/Shock Pulse on random targets. The Symbols of Xarxes mechanic from his encounter will also appear, stand in the gold circle to avoid lethal damage from it. Do note that when Symbols is cast, all other enemies will be stunned. Vykosa, Ary and Zel will be immune to damage but the rest of the enemies can be killed.

She can first be seen standing on the balcony overlooking the Keep Bailey.

Vykosa the Ascendant: "Was Vykosa not told the intruders would be dealt with? Must she handle everything herself?"
Mylenne Moon-Caller: "They shall not intrude much longer, my mistress. I swear it."

When she finally reached in person she will launch into a tirade about how Hircine ruined her life.

She has a few words for you if you idle without fighting her for a while.

Swap to Add Phase
"It seems Vykosa must handle you personally."
"You think this one needs her pets to attack?"
"My claws alone are enough to defeat you!"
"This one does not mind getting her claws bloody."

Swap to Pet Phase
"You are feeling tired, no? Why not give in to Vykosa's might?"
"You're more resilient than Vykosa thought. Well, no matter."
"Still alive? Well, Vykosa simply must do something about that."
"Still you have not fallen? How surprising."

Fear Totem summon
"Feeling a little … frightened?"
"You cannot fathom Vykosa's power!"
"You shall fear Vykosa's might!"
"Run! Run like the prey you are!"

Entering Execute Phase
"Zel! Ary! Let us hunt together."
"Ary! Zel! To me!"
"Let us strike against these fools!"
"Let us finally feast!"

There are several achievements associated with this NPC: