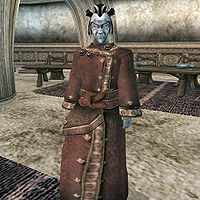 Athyn Sarethi is a Dunmer agent and a Councilor in House Redoran. He can be found in Ald'ruhn in the Sarethi Manor in the Manor District with his wife Domesea Sarethi. He offers major training in Short Blade, and medium training in Light Armor and Sneak. He has powerful enemies; not only has he fended off three Morag Tong attacks already (one of which you get to witness), but his son has just recently been kidnapped as well.

Athyn wears a chitin cuirass with matching greaves and boots and an extravagant robe with a matching belt. He carries the clearly misnamed Llethri Manor key and a dwarven shortsword. Aside from his natural resistance to fire and the sanctuary provided by his ancestors, he knows no spells.

Initially, Athyn has the following things to say about the other members of the Redoran Council:

When you arrive at Sarethi Manor, you can find Athyn standing near some recently killed assassins:

Once you have dealt with the next wave of assassins, you can speak with him again to receive his thanks and to progress in this quest:

Should you choose to ask him about duties before you have wrapped things up with Neminda, he says:

As Neminda will have told you by now, Athyn is your best hope to progress further in the ranks of House Redoran. Fortunately, Athyn is up to the task, but he does have a request for you first:

Speak with him after you have rescued his son from Venim Manor and he will express his gratitude and confirm that he will become your sponsor:

If you speak with him again right after the end of this quest, he says:

When you return to him for more duties after a while, he will have a new request for you, one that once again revolves around his son:

If you speak with Athyn again at this point in the quest, he says:

You need to speak with him again after you have talked to Varvur and have taken the ash statue away from his room:

After you have spoken with Lloros Sarano at the local Tribunal Temple, you may return to Athys to complete this quest:

If you bring up the topic after this quest has been completed, he says:

A mouthy Hlaalu noble is slandering Bolvyn Venim's name and Athyn wishes for you to put an end to this, despite the history that the two Redoran nobles have:

Return to Athyn after you have successfully resolved the situation and he will say:

However, if you opted for a less honorable approach, Athyn will be somewhat displeased with you:

The next quest that Athyn wants you to complete involves dealing with a gang of smugglers occupying a cave southwest of Gnaar Mok:

If you already killed Enjine and Daroder before Athyn asks you to do so, Athyn will acknowledge this fact instead of giving you the quest as he would normally do:

Otherwise, you will have to return to Athyn after making a trip to Shurinbaal in order to complete this quest:

Mentioning the topic again after the completion of this quest elicits the following response:

The Mad Lord of MilkEdit

As soon as you have dealt with the smugglers in Shurinbaal, Athyn has a new quest ready for you:

Return to Athyn after taking care of Arethan one way or another to conclude the quest:

If you mention Arethan Mandas again after the end of this quest, Athyn says: