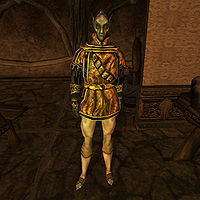 Ondres Nerano is a Dark Elf merchant and Hireling of House Hlaalu who lives in his manor on the west side of Balmora. Sugar-Lips Habasi of the Thieves Guild wants to rob his house; Athyn Sarethi wants you to force him to retract his slanders about House Redoran.

Ondres wears an extravagant shirt, pants, gloves, belt, shoes, ring, and sapphire amulet. He carries his key to the manor along with up to 150 gold. Aside from his natural resistance to fire and the sanctuary provided by his ancestors, he knows the spells Great Resist Frost, Great Resist Fire, Great Resist Common Disease, Charisma, and Wisdom.

When you confront Ondres about his slanders, he will challenge you to a duel:

If you manage to inflict enough damage to his health, he will stop the duel and will moreover promise to retract his statements:

Bringing up this topic again will prompt him to react annoyedly: