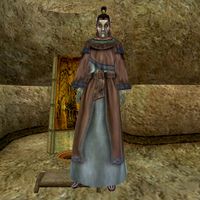 Lloros Sarano is a Dark Elf priest who can be found at the Ald'ruhn Temple. He is also a member of House Redoran, and will have several quests for you if you are also a member. Aside from that, he also provides the usual Priest services, selling books, potions, alchemy ingredients, and spells, along with custom spellmaking services. These services are available to anyone, regardless of faction membership (though he may refuse service if you have been expelled from House Redoran). Lloros keeps a constant supply of standard restorative potions, as well as the following ingredients: Ghoul Heart, Gravedust, Red Lichen, and Shalk Resin.

Lloros wears common robes and matching shoes. He wields a Silver Staff of Reckoning and carries his entire supply of restocking raw ingredients as well as a small selection of restorative potions.

After acquiring the strange ash statue from Varvur and speaking with his father, it is time to seek advice at the local Tribunal Temple. Lloros will have the following things to say upon being confronted with the eerie object:

Varvur will point you towards Galtis Guvron, the person from whom he got the ash statue. You should return to Lloros after you have dealt with Galtis and show him the note that you found on his body:

Speak with him again after killing Hanarai, who indeed was not at all in a talkative mood, to wrap up the quest:

After retrieving the Morvayn ash statue from Morvayn Manor, you can present it to Lloros:

If you ask Lloros about this subject after completing the quest, he will say:

After finding and rescuing Beden Giladren, you can report back to Lloros:

Speak with Lloros after returning from Andasreth with the four lost Redoran Banner Shields in your inventory to complete the quest, and to be offered a Redoran shield of your own:

Should you ask about Andasreth after completing the quest, he will reaffirm your deed: