The Manor District at night

The Manor District is the seat of House Redoran Council in Ald'ruhn. 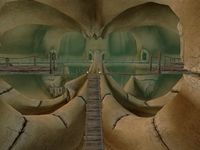 All House Redoran Councilors live Under-Skar in the Manor District in Ald'ruhn, entrances clockwise from the entrance are: Ramoran, Sarethi, Llethri, Council Hall, Arobar, Morag Tong Guildhall and Venim Manor. Fine shops are available on the bottom floor, for kinsman services see the Council Hall. The wealth in the manors attracts many thieves, and not just for the many drawers with jewelry and extravagant clothing.

Clad in Dwemer armor, you'll find Hlaren Ramoran in the Ramoran Private Quarters. Despite the success in his life, he has little personal happiness.

Right down the stairs, Athyn Sarethi will be your sponsor in advancing to higher ranks and is your first contact in order to be named Redoran Hortator. He is somewhat at odds with Archmaster Bolvyn Venim.

Garisa Llethri is found in his Private Quarters. His family is somewhat out of control. 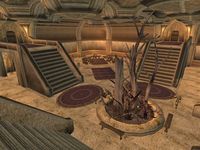 Inside the Redoran Council Hall

The Redoran Council Hall holds training facilities, guest rooms and services for kinsmen. Neminda in the entrance of the Redoran Council Hall will give guidance, if you want to become a Redoran Kinsman. The temporary home of Councilor Morvayn is located in the back of the entry hall. Galsa Gindu will assist you in building your Redoran Stronghold. Guls Llervu offers healing potions and spells to all factions, among them Mark, Recall and Almsivi Intervention.

As usual, writs are available here for budding assassins, helping in bringing justice and tipping the scale in feuds. Training and Thieves Tools are among the services here and Goren Andarys is the guild steward. Salyni Nelvayn offers useful spells for the trade, among them Damage Health, Paralyze and Damage Fatigue.

Bolvyn Venim is the current Archmaster of House Redoran. He leads the House with a uncharacteristically strong hand, not shying away from kidnapping his rival's son. Most of the retainers here are clad in customized Dwemer Armor, bearing witness to the wealth of their master, who is sporting Ebony Armor himself. 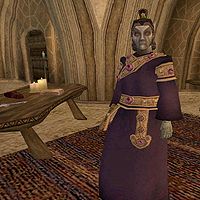 On the bottom floor of the giant shell are three fine shops. The Clothier is actually a Hlaalu informant. The Alchemist has Scrap Metal. The Enchanter has a wide array of spells and useful magical items, among them a Last Wish Shortsword in bad repair.