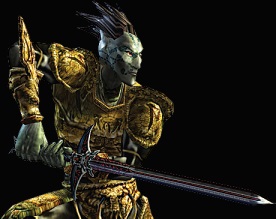 Dark Elves, also known as Dunmer, are the ash-skinned, red-eyed elven peoples of Morrowind. "Dark" is commonly understood as meaning such characteristics as "dark-skinned", "gloomy", "ill-favored by fate" and so on. Dark Elves and their national identity, however, embrace these various connotations with enthusiasm. In the Empire, "Dark Elf" is the common usage, but among their Aldmeri brethren they are called "Dunmer". Their combination of powerful intellects with strong and agile physiques produce superior warriors and sorcerers. On the battlefield, Dark Elves are noted for their skill with a balanced integration of the sword, the bow and destruction magic. Dark Elves live two to three times as long as humans; with a 200-year-old Dark Elf being old and a 300-year-old Dark Elf being very, very old. In character, they are grim, aloof, and reserved, as well as distrusting and disdainful of other races.

Dark Elves distrust and are treated distrustfully by other races. They are often proud, clannish, ruthless, and cruel, from an outsider's point of view, but greatly value loyalty and family. Young female Dark Elves have a reputation for promiscuity in some circles. Despite their powerful skills and strengths, the Dark Elves' vengeful nature, age-old conflicts, betrayals, and ill-reputation prevent them from gaining more influence. Those born in their homeland of Morrowind are known to be considerably less friendly than those who grew up in the Imperial tradition.

Here we have a race that's not really devoted to anything — Dark Elves are a solid, flexible race and have no real weaknesses. In addition, the large proportion of Dark Elves present in the game means that you will have a higher starting disposition with the majority of the population. Dark Elves have skill bonuses in several areas but none are especially significant—except perhaps for Destruction and Short Blades, which can give a nice boost if those were chosen as non-specialized Minor Skills, making a starting character better-rounded.

Dark Elves' 75% Resistance to Fire means you can shrug off all but the most devastating of fire spells (remember that NPC Dark Elves have this resistance too!), and means you can easily reach complete immunity from fire with one or two enchanted items or potions. Their Ancestral Guardian Power is a great protective bonus, providing a 50 point Sanctuary effect for 60 seconds. That is a great help to keep you protected from any attack that isn't a spell. That's useful for any Dark Elf character, from mages to archers to heavy warriors.

Given their lack of specialization, it is hard to determine what an ideal Dark Elf character would be; perhaps one who would make use of all their racial skill bonuses. If so, then one would have either a Scout, Nightblade, or Assassin character: a fast, lightly-armored fighter capable with blades and bows, using Mysticism's various utility spells for healing, detection and escape, alongside Destruction to further hinder enemies with Absorb/Damage/Drain Attribute spells. Of course, one could use Destruction to hurt foes directly, but with blades and Marksman it wouldn't be necessary. A better synergy would be to cripple opponents so that they can be finished off more easily with conventional weapons.