Miner Arobar in his manor in Ald'ruhn will initially refuse to talk with you and give you his support. Return to Athyn Sarethi to learn that Arobar might be influenced by the Telvanni, and you are to find out how it's being done and remove it. 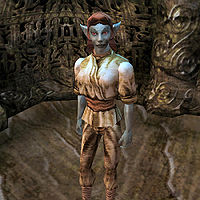 Travel to Sadrith Mora, and talk with people in the town to learn that the Telvanni councilor Master Neloth is holding Arobar's daughter hostage in Tel Naga, in the center of town. Arobar's daughter, Nartise, is held in the Tel Naga Great Hall and is well guarded (the guards will attack you as soon as you free her). Nartise will follow you to the docks in town and will continue on her own from there.

Return to Arobar to get his support on the Council, his enchanted amulet and a Redoran Master Helm.