Welcome to the Unofficial Elder Scrolls Pages! We have been building a collaborative source for all knowledge on the Elder Scrolls series since 1995, and we could use your help! To begin browsing our site, you should select one of the games on the left side menu. If you would like to help us build the site, you can learn how to get started as an editor, read over the help files, or look through our guide to helping out. If you'd like to discuss The Elder Scrolls with other users, please consider using the UESP forums or Discord server.

This site's purpose is to provide information; therefore, most of the content contains spoilers.
All Content • Searching • Questions • How to Contribute • Help Files • Forums
We are currently maintaining 94,595 articles. 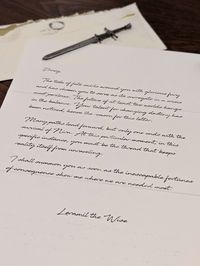 More letters have been sent to influencers in the Elder Scrolls Online community to hint at the upcoming releases to the game. Addressing readers as "Proxy", the letter claims to be from a previously unmet individual known as Leramil the Wise. It reads:

The tide of fate swirls around you with glorious fury, and has chosen you to serve as its surrogate in a crisis most perilous. The future of at least two worlds hangs in the balance. Your talent for changing destiny has been noticed, hence the reason for this letter.

Many paths lead forward, but only one ends with the survival of Nirn. At this particular moment, in this specific instance, you must be the thread that keeps reality itself from unraveling.

I shall summon you as soon as the inescapable fortunes of consequence show me where we are needed most.

Notably, when exposed to a blacklight, the letter reveals a symbol of the Daedric Prince Hermaeus Mora. The letter also references a "tide of fate", with Hermaeus Mora previously claiming the title of "Master of the Tides of Fate" and being referred to as the "Tides". Although more speculative, it may be worth noting that the hidden symbol required a blacklight to be revealed, and one of the remaining notable locations of Tamriel that Elder Scrolls Online has yet to visit is the Redoran capital city of Blacklight.

You can view our article on this letter here. 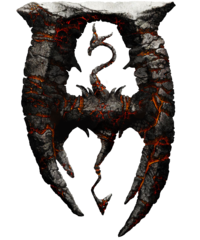 Skyblivion, a community effort to remake The Elder Scrolls IV: Oblivion in the iteration of the game engine from The Elder Scrolls V: Skyrim, has officially announced that the project will be made available to the public by 2025. The project first began development in 2012, and has been worked on by a team of volunteers since then. Skyblivion will bring with it the entirety of Oblivion into Skyrim, including all of its expansions, some cut content, and brand new additions.

A copy of Oblivion and Skyrim with all expansions on the PC will be required to be able to play Skyblivion. An official announcement trailer can be viewed here. You can find out more about the project, as well as volunteer, over on the Skyblivion website.

Xbox and Bethesda to Hold Presentation on Upcoming Games — January 11, 2023

After a considerable pause in news from Microsoft-held studios, Xbox and Bethesda have announced an upcoming Developer_Direct, a presentation on upcoming games hosted by their studios. Noted presentations will include Arkane Austin discussing Redfall, Mojang Studios for Minecraft Legends, Turn 10 Studios presenting Forza Motorsport, and ZeniMax Online Studios showing Elder Scrolls Online. Notably absent is Bethesda Game Studios itself, which will instead be hosting a separate show on Starfield at a different date.

ZeniMax Online Studios will be making an announcement about this year's plans for Elder Scrolls Online during the Developer_Direct, before hosting its own separate Global Reveal Event immediately after the completion of the show at 3:45PM ET. ESO players who stay for the second show will receive the Ritual Casting emote as a Twitch drop.

The Developer_Direct will be held on January 25th, starting at 3PM ET and scheduled to end at 3:45PM ET. You can view Bethesda's official announcement on their website.

LotusOfDoom from the Tales of Tamriel is hosting a streaming marathon this weekend, 3-4 December 2022, to support the #ExtraLife charity. The UESP is matching donations up to $3000 as well as donating a few of our Patreon rewards for giveaways. Check them out this weekend and help a worthy cause!

As many are likely aware by now, Beyond Skyrim's Facebook page has been hacked. They're asking everyone to please join them at their new page.

Tamriel Rebuilt is a mod for Morrowind which adds the mainland of the province to the game, piece by piece.

Combined, the two expansions include new land areas three times the size of Bloodmoon and about 200 new or overhauled quests, bringing the total quest count of Tamriel Rebuilt to parity with the vanilla game and expansions.

Elder Kings 2 is a total conversion fan mod for the strategy game Crusader Kings III, based on the Elder Scrolls main series as well as Elder Scrolls Online. Choose any ruler on Tamriel and Yokuda to steer your dynasty through the turmoil of the Interregnum, a time without a Dragonborn Emperor on the Ruby Throne, starting from either 2E 440 or 2E 450. Aside from the classic 10 playable races of TES, Elder Kings II allows the player to control others such as Lilmothiit, Tsaesci, Ayleids, even Goblins and many more.

Elder Kings 2 will release on 11.11.22 via the Steam Workshop and a direct download.

You can learn more about this mod in its article.

Google has today announced that it will be shutting down its cloud gaming service Stadia on January 18, 2023. This will affect players of Elder Scrolls Online who have purchased the game through Stadia. The Stadia store has been taken offline, so it is no longer possible to purchase Elder Scrolls Online on Stadia. Those who already own the game can continue to use the service until January. Google has confirmed that refunds will be given for all software and hardware purchases made through Stadia.

Stadia uses the same megaservers as PC/Mac, so no account migration will be required once you own the game on PC or through Steam. If transitioning from Stadia to PC, be aware that running the game locally has higher network requirements than streaming from the cloud.

Update 20 October 2022: ZeniMax have announced that Stadia players will be able to log in and download ESO for free on PC/Mac.

The Anniversary Edition upgrade for Skyrim is now available on Nintendo Switch. It can be purchased separately or as an upgrade for those who already own Skyrim on Switch. The original Switch version of the game has also received a free update to include the Fishing, Rare Curios, Survival Mode, and Saints & Seducers Creations.

This release coincided with Skyrim becoming available from GOG. This is the first time Skyrim has been released DRM-free on PC. Both Special Edition and Anniversary Edition are available from the store. GOG also allows for game version rollback and disabling of automatic updates for those who wish to use certain mods.

Details about a new board game set in the Elder Scrolls universe has reached Gamefound, Betrayal of the Second Era. Set during the events of Elder Scrolls Online, the game has you combat the machinations of the Order of the Black Worm. The game will have you journey across Black Marsh, Cyrodiil, High Rock, Morrowind, and Skyrim to complete quests, with expansions planned for Hammerfell, Summerset Isles, and Valenwood (omitting Elsweyr at this time). The game will support one to four players, and will feature character creation and development, with thirty main quest stories. A game session consists of choosing a quest and province, with an endgame based on choices made if you reach a third session with a character.

You can learn more about this game on the Gamefound page.

Firesong and Update 36 for Elder Scrolls Online is now available on the Public Test Server. This fourth quarter update brings to a close the Legacy of the Bretons story arc. Firesong returns to the Systres with the islands of Galen and Y'ffelon, almost entirely controlled by the druids besides the House Mornard city of Vastyr. The area is wrought with danger brought on from the eponymous Firesong Circle waging war and simulataneous Sea Elf raids.

You can see the official announcement here and a breakdown of new additions to the game here. You can also find the patch notes for Update 36 here.

Battlespire and Redguard have been added to Game Pass on PC, giving more players access to the third and fourth games released as part of the larger Elder Scrolls franchise. Notably the announcement specified that access was for PC only, likely because they were never originally ported for consoles. Besides these classic TES titles, the announcement also revealed that Quake 4, Wolfenstein 3d, and Return to Castle Wolfenstein would also be coming to the PC version of Game Pass. As a smaller bonus, Ultimate Game Pass subscribers will also have all champions unlocked in Quake Champions as a perk for their membership. Unsurprisingly considering the number of classic id Software titles included, this was timed to coincide with this year's QuakeCon.

Elder Scrolls Online is holding a free to play event until August 29th on all platforms. This comes with the noted exclusion of the Steam version of the game for the PC version, and Xbox players will still need Xbox Live Gold to access online features. During this window players will have access to the base game of Elder Scrolls Online, as well as the Vvardenfell zone which was originally part of the Morrowind Chapter. The event coincides with QuakeCon, a convention which began as a gathering of Quake/id Software fans in 1996. id Software would begin taking over organization of the event in 1999, and after id was acquired by ZeniMax in 2009 the event began incorporating other ZeniMax properties. The free to play event also takes place at the same time as an ongoing sale of the game, set to end the day after the free to play access ends.

You can see the official announcement here, and you can learn more about this game on our article. 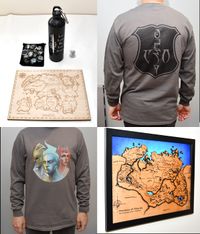 The Unofficial Elder Scrolls Pages would like your help supporting our site and projects via Patreon. Please consider becoming a supporter over on Patreon.

By supporting our Patreon, you can receive numerous rewards in 2022:

See more details on the 2022 rewards on Patreon.

The act of fishing has many variables that go into determining what you catch. The most important of these are the biome you are fishing in, the time of day, the population of fish at the fishing spot, the rod you are using, and any quests that you may have active. Fishing can only be performed at designated fishing spots by activating the nearby Fishing Supplies while holding a Fishing Rod. You can purchase fishing maps to locate certain fishing spots. (more...) 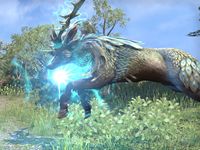 (updates once per hour)

Would You Like to Know More?
Retrieved from "https://en.uesp.net/w/index.php?title=Main_Page&oldid=2739873"
Read in another language