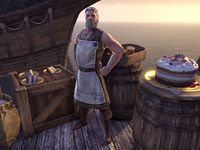 The Anniversary Jubilee is a holiday event that typically takes place in the month of April and May. It is a yearly celebration of the release on ESO. During this event players can obtain a 100% XP buff and the opportunity to acquire a variety of items. The festival also has a special quest associated with it, named Ache For Cake, which repeats every year. A notable feature of the event is the inclusion of Anniversary Jubilee Gift Box — special reward containers that grant players various event-themed items.

This box contains a variety of crafting-related materials, intended for celebrants of the Anniversary Jubilee.

An Anniversary Jubilee Gift Box can be obtained by completing daily or weekly quests during the event. Multiple can be earned each day. Each Gift Box contains a selection of items, some of which related to the Anniversary Jubilee. This includes crafting motifs, recipes, furnishing plans and crafting materials (style materials, ores, raw materials, wood, dust, potency runestones, provisioning ingredients, solvents). All of these items can be traded with other players. Rewards vary slightly each year as detailed below.

A unique feature of the Anniversary Jubilee is the Jubilee Cake, baked by Chef Donolon. Once the Ache For Cake quest has been completed, the cake is granted as a Memento that can be called into the world. Once placed, anybody within your group can take a slice and receive a two-hour 100% XP buff that stacks with any other active XP bonuses. The cake's appearance changes every year, becoming taller and more elaborate. Once the event is over, the cake can still be summoned and interacted with, but does not grant the XP buff.

Grab a slice of cake and join us as we celebrate The Elder Scrolls Online’s eighth birthday with bonuses to XP gains, tons of Event Tickets, and more!

During the Anniversary Jubilee you will receive Anniversary Jubilee Gift Boxes for completing different daily quests. These boxes can provide new style pages to unlock the Saberkeel outfit styles. In addition, each anniversary gift provides crafting materials and a chance at valuable motif pages, crafting recipes, and style items.

The Impresario will sell the following:

Eat cake and enjoy bonus XP and rewards during the Anniversary Jubilee in-game event and join us in celebrating ESO’s 7th birthday!

The Seven Year Anniversary event ran from April 1 to April 15, 2021. The event was initially meant to run until April 13, but was extended on all platforms due to maintenance downtime on the PlayStation servers on April 5, 2021.

Like previous years, you could complete the event's Ache For Cake quest to obtain the Jubilee Cake 2021 memento. Using the memento during the event gave you a two-hour 100% XP boost.

Completing daily quests gifted you an Anniversary Jubilee Gift Box, which contained the same loot as 2020's anniversary event, with some additions. Notably Imperial Champion weapon style pages were introduced during the event.

You had the chance of earning a max of 39 Event Tickets during the Event run. Three tickets could be earned by using the Jubilee Cake 2021 memento once per day. During the event, the Impresario introduced the first two fragments for the Deadlands Firewalker personality: the Vial of Simmering Daedric Brew and Vial of Bubbling Daedric Brew along with the 2021 replica cake and bound pages for the Imperial Champion Style.

Notable additions this year were the introduction of the new Jephrine Paladin Style pages and replica Jubilee Cake furnishings.

Each Gift Box contains a wide variety of items identical to the previous year. In 2020, the drops were updated to include some of the newer Crafting Motifs and furnishing recipes released in the last year, including:

During the anniversary, there is a discount on Crown Packs. Additionally, several limited and discounted items are available in the Crown Store during this time.

During the event there is an exchange where gifting other players five or more Event Tickets in total will see you receive four Gloomspore Crates once the event is finished. The minimum number of tickets needed can be spread between multiple recipients.

The Five Year Anniversary Jubilee ran from April 4 to May 9, 2019. This event was similar to the previous year (including the XP buff and a new 2019 Jubilee Cake Memento) but ran for five weeks - one week to represent each year since launch.

Each Gift Box contains a wide variety of items identical to the previous year. In 2019 they also had a chance to contain Jewelry Crafting materials, both raw and refined, including a very small chance at Chromium Plating. Aetheric Ciphers, Mother of Pearl and Clam Gall were also added to the potential drops. To make room for these additions, the rate of obtaining previous Furnishing Materials and Motifs were slightly lowered.

Throughout the entire event two Event Tickets could be obtained by interacting with the Jubilee Cake 2019 each day. By the end of the event a total of 72 tickets were obtainable. As such, The Impresario sold a large number of items during the event, included the aforementioned Companion style pages and all four Luminous Berries required to evolve the Nascent Indrik into a Luminous Indrik mount.

The Four Year Anniversary Jubilee ran from April 4 to April 23, 2018. This event was identical to the previous year, including a new 2018 Jubilee Cake Memento, XP buff and Anniversary Jubilee Gift Box. One notable addition this year was the chance to obtain rarer motif chapters previously only available in Vvardenfell, Horns of the Reach dungeons and the Clockwork City. In addition, this year introduced the chapters from the Worm Cult Style which can only be found in the Anniversary Gift Boxes.

Each Gift Box contains a wide variety of items. An exhaustive list would be prohibitively long to detail here, but almost any item from each category can drop:

The Three Year Anniversary Jubilee ran from April 4 to April 18, 2017. This event was identical to the previous year, but with the introduction of the Anniversary Jubilee Gift Box. These gift boxes could be obtained by completing daily or weekly quests during the event. In addition, a new Jubilee Cake Memento for 2017 was granted to players.

Each Gift Box contains a wide variety of items. An exhaustive list would be prohibitively long to detail here, but almost any item from each category can drop:

The inaugural Anniversary Jubilee celebrated the game's two year anniversary. It ran from April 3 to April 12, 2016. The event itself was relatively basic and introduced the quest Ache For Cake, which involved helping Chef Donolon bake his new Jubilee Cake recipe. The 2016 Jubilee Cake Memento was given as a reward, and would result in a 100% Experience bonus for you and your group when activated during the event. Due to a bug with XP buff stacking, the event was extended from April 10 to April 12.