This page lists TES games that were canceled for one reason or another.

Originally, the follow up to Daggerfall would have been a direct sequel with a similar gameplay style and using the same engine. This iteration would have been titled The Elder Scrolls Chapter III: Tribunal, and was initially set in the Sumurset Isles before the setting was moved to Morrowind. 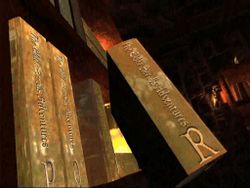 The Elder Scrolls Adventures: Paradise Sugar was supposedly the third planned installment of the TESA spin-off series, following the story of Redguard and the cancelled Eye of Argonia. Due to Redguard's poor sales and ZeniMax Media's purchase of Bethesda, the two sequels were never developed.

Oblivion (PSP) was a planned Elder Scrolls Travels game to be released around a year after TES IV: Oblivion. It would have been the fifth mobile game. It was planned to lack the free-roaming gameplay usually associated with the Elder Scrolls series. According to executive producer Todd Howard, the game would have featured ten large levels that look much like areas in the console versions, but more concentrated. Eighteen out of the twenty-one skills from Oblivion were present. The controls were influenced by Metroid Prime. "The analog stick will allow you to move forward, backward, and turn sideways. Holding L will allow you to strafe, and holding R will let you look around the area from your character's perspective." There has never been any official reason given for its cancellation or even official confirmation that it was canceled.

"Oblivion comes to the PSP with all your favorite free-form gameplay, unprecedented graphics, cutting edge AI, character voices by acting legends Patrick Stewart, Sean Bean, Terrance Stamp, and Lynda Carter along with its award-winning soundtrack. Gamers can choose to unravel Oblivion's epic narrative at their own pace or explore the vast world in search of their own unique challenges. After the mysterious and untimely death of the Emperor, the throne of Tamriel lies empty. With the Empire ready to crumble, the gates of Oblivion open and demons march upon the land laying waste to everything in their path. To turn the tide of darkness, you must find the lost heir to the throne and unravel the sinister plot that threatens to destroy all of Tamriel." —Amazon description