Rihad is one of the eight major cities in the province of Hammerfell,[1] situated in the southernmost point of the province, near the mouth of the Brena River. Rihad is a port city occupied by the Forebears, the modern-day remnants of the Ra Gada.[2]

Rihad is located in the southern region of Hammerfell, where the Forebears cities are much more cosmopolitan in nature than the traditional Crowns cities to the north.[2] The city itself sits at an ideal spot on the Abecean Coast, next to the Brena River to the south and Hew's Bay to the north. Rihad's region has a tropical wet-dry climate and is prone to the occasional forest fire likes their neighbors in Colovia.[3] Not far from the city, just to the south, is an impressive Ayleid ruin called Varlaisvea.[4] The Coffee Scorpion of Rihad is named in homage to the city's kaveh, which is considered strong, dark, and sweet.[5] The musk of the local Fennec Fox is turned into a perfume, which is considered very fashionable for the nobility of southern Hammerfell, including Rihad.[6] Rihad is neighbored by several settlements, including Chaseguard to the northwest and Stonemoor to the northeast.[1]

It is unknown when the city was founded, but the Tavan wave of the Ra Gada moved along the southern coast of Hammerfell,[8] which is now prominent Forebears country.[2] One of the city's oldest known citizen was the Red Dervish of Rihad, Yousebh the Stringent, who is attributed with the quote, "a daughter of the House of Akos Kasaz shall not marry an infidel of another house." It is a mantra that both the Crowns and Forebears have upheld for many years.[9]

Since the Redguards began to trade with the Colovians in the tenth century of the First Era, Rihad has been in close contact with them for better or for worse.[2] Sometime in 1E 2818, the Colovians were engaged in a conflict known as the War of Rihad and used Bosmeri archers before they realized that they were too undisciplined and desertion was common.[10] By the late Second Era, Colovian Princes would hire bodyguards from Rihad.[11]

At the time of the Second Empire's occupation of Hammerfell, the Phyllocid Dynasty reigned over a province split apart by the Crowns and Forebears. Prince Ar-Azal of Hegathe inherited a throne rife with conflict and needed a solution to mend the province. After he received a vision from Satakal the World-Eater, who appeared as the Snakehead Potentate, he traveled to the Fresco of the Goshawk and saw that Tava was nested with two mates, instead of the one that is normally there. King Ar-Azal took it as a sign from the divines and married one noblewoman of each faction. He married Fereshtah, daughter of the Forebears Grandee of Sentinel, Ebrahim, and also married Arlimahera, daughter of the Crowns Grandee of Rihad, Murahd.[12]

Rihad in the Third EmpireEdit

The ruined halls of Stonekeep 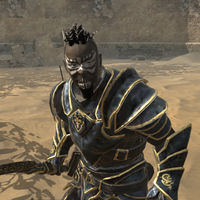 Rihad and nearby Taneth were on the path of the Camoran Usurper's invasion of western Tamriel, which started in 3E 249. The Redguards were fully confident that the two cities would have defeated the Usurper, but the Forebears cities were defeated in the Battle of Dragontooth in 3E 253.[13]:8 Refugees from these cities fled north into the Iliac Bay and went as far as Dwynnen.[14] Since the Crowns of Elinhir noticeably did not help the cities to the south, the Forebears of Rihad and Taneth also did not help them in the midst of the War of the Bend'r-mahk years later. They preferred to watch from afar instead of help them.[2]

During the Imperial Simulacrum in the late Third Era, the city-state of Rihad was an active settlement. It was ruled by Queen Blubamka and had a rivalry with Taneth.[7] After their escape from the Imperial Prisons, the Eternal Champion was set forth on a quest by the spirit of Ria Silmane to retrieve the eight pieces of the Staff of Chaos. The spirit tells the warrior to locate Fang Lair, where the first piece is located.[15] Their quest eventually took them to the city-state of Rihad, where they garnered an audience with Queen Blubamka. The Queen would have relayed the information, but a band of goblins led by Golthog the Dark stole a special parchment from Rihad Palace. The parchment was able to decipher an Elder Scroll that would in turn reveal Fang Lair's location. The Eternal Champion returned with the parchment from the goblins in Stonekeep and traveled north into Fang Lair, where they found their first piece.[15] Ever since the champion's victory over Jagar Tharn, Imperial-loyalists would re-trace their steps across the provinces and make their way through Rihad.[16]

Not much is known about Rihad during the Great War, but what is apparent is that the cities across southern Hammerfell had fallen to the Aldmeri Dominion, with only Hegathe to the west left standing. The entire southern region was left in shambles by the end of the war, even when the Redguards re-claimed the entire region, it was still in state of ruin. When the White-Gold Concordat was signed in 4E 175, Hammerfell had officially ceded from the Empire,[17] and at that point, the noble house of Rihad faced some issues. Prince Dinahan al-Rihad, an Imperial loyalist was exiled from the throne and later granted asylum in Cyrodiil by the Empire. During his time there, he became an arena combatant and had active intent to retake the throne.[18]