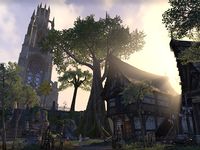 Southpoint, also spelled South Point, is a coastal city in the far southeast of Valenwood, farther west than Haven, in the Grahtwood region.[1]

The city was founded in 1E 2729 by the Colovian governor Zantonius, born in Kvatch. It became the main port and Imperial colony in the Kingdom of Grahtwood, then an administrative division of the Second Empire in Valenwood.[2]

In 2E 580 was incorporated to the First Aldmeri Dominion along with the rest of Camoran-controlled Valenwood after the Blacksap Rebellion was put down by Ayrenn and Aeradan Camoran joined forces.[3][4] In 2E 582, Southpoint's citizens began killing one another in the streets and Dominion soldiers cordoned off the town. Sheogorath had taken control of the Mayor, but the Vestige ended the madness, dealing with both the corrupt Imperial mayor and the Daedric Prince, and the city remained in the Dominion until its eventual dissolution.[5]

In 2E 830, the city was again annexed by the Second Aldmeri Dominion after the intervention of Summerset in another Camoran civil war.[6] However, the catastrophic use of the Numidium by Tiber Septim resulted in the conquest of both the entirely of Valenwood and the Summerset Isles in 2E 896, ending the Second Aldmeri Dominion control of the settlement, which was incorporated to the Third Empire.[7]

During the Third Era, the city remained in Empire hands except for the Camoran Usurper Rebellion between 3E 249 and 3E 267.[8][9] During the Imperial Simulacrum in the late Third Era, the city-state of Southpoint was an active settlement. It was ruled by Queen Mindra, and it had a rivalry with Eldenroot and Haven.[10] Southpoint was neighbored by several settlements, including Green Hall to the northeast, and Stonesquare to the north.[11] The Oblivion Crisis that ended the Third Era and weakened the Empire provided the opportunity for the Thalmor to seized the Summerset Isles. In 4E 29, a Thalmor-backed coup overthrew Valenwood's government, routing Imperial forces and their Bosmer supporters. Alinor and Valenwood then proclaimed a union, and a new Aldmeri Dominion was formed. The city fell into Aldmeri hands for the third time in history.[12]

An Altmer-imported celebration, the Rites of Xarxes Memory, was held annually by the mid-Second Era in its cathedral.[13]