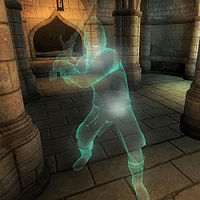 The ghost of Sir Amiel

Sir Amiel's Ghost wears the armor of a knight. He wears the cuirass and shield of his order. He wears the ring you found on his skeleton, as well as chainmail helmet, greaves, boots, and gloves. Sir Amiel wields an elven claymore to defend the Crusader's Cuirass.

When you attempt to approach the Cuirass of the Crusader, Sir Amiel will emerge from nowhere and seek you out, seemingly still keen on protecting the relic: "By the strength and guidance of the Nine, who comes before us upon this sacred ground seeking the Cuirass of the Divine Crusader? Step forward, adventurer, and face us each in honorable combat. For the vows we failed to revere in life, we shall uphold in death. No unworthy soul shall lay hands upon this sacred artifact without the leave of the Knights of the Nine." First in line is Sir Gregory and after his defeat, Sir Amiel will proceed and summon all the ghostly knights one by one: 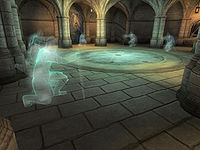 Ghosts of the Nine

"Sir Gregory, you are defeated. Sir Casimir, step forward."
"Impressive. You have bested Sir Casimir. Now, face Sir Ralvas."
"Sir Ralvas, you have fallen. Step back and let the challenge continue. Sir Henrik, come forward and prove yourself."
"You have overcome half of us and yet you remain standing. Perhaps Sir Caius shall test your true mettle."
"You show a fury of faith that I have not seen in centuries. But now you face Sir Juncan."
"You have lost, Sir Juncan. Sir Torolf, show the challenger the ferocity of the North."
"You have stood against the Knights of the Nine and lived. However, the final test is upon you. Ready yourself, Sir Knight, and face me."

After having thrown himself into the battle, with the inevitable result, Sir Amiel will, similar to the seven kneeling Knights, surrender and grant you access to the Cuirass of the Crusader with the words: "Sir Knight, in three hundred years none have stood against us and lived. Step forward and claim what is yours by right. May your faith be true." After having activated the Cuirass, Sir Amiel, seemingly puzzled after witnessing all his Knights fail to protect the Cuirass, will say: "By the Nine, I've not seen such strength. Could you be... no. You cannot. You are simply a noble knight." He will then be available for questioning. If you ask him about the Knights of the Nine, he will explain: "The original order of the Nine was founded with the intention of safekeeping the Crusader's Relics. In life, we failed at this task. In death, we seek to preserve what little we accomplished while we wait for one to come and finish what we began." When asked about the Helm of the Crusader, he will thank you: "You completed the quest that I could not. I am glad that my death at least served to lead you here, as I had hoped." You can also ask him about the treacherous Sir Berich. When doing so, Sir Amiel will tell you the full story: "One of the mightiest knights of my day. It was a great boost to the Order's prestige when he joined. Unfortunately, he and I did not see eye to eye on certain matters. He left the Order during the War of the Red Diamond, and never returned."

After you have spoken to Sir Ralvas and initiated The Path of the Righteous, Sir Amiel will reveal a bit more about Sir Berich and elaborate on how Sir Ralvas lost his life trying to reach the Mace of Zenithar: "After Berich betrayed us, Sir Ralvas journeyed to the Chapel of Leyawiin to attempt Zenithar's test of faith. He tried to reach the mace again and again, failing each time. He became obsessed with it, refusing food or drink for days. When I finally received word of his quest, I went searching for him. But.. I was too late. Sir Juncan helped me carry his body back here. I failed my friend and I failed Zenithar. Perhaps you can succeed where Sir Ralvas could not and redeem us both." When you return with the mace, he will thank you on behalf of all the Knights involved: "You've passed Zenithar's challenge and redeemed Sir Ralvas. Congratulations. Sir Juncan will be pleased to hear this."

After you have spoken to Lathon in the Priory and the quest The Faithful Squire is initiated, Sir Amiel will, when told about Sir Roderic's death by the hands of a Wraith who was able to wield the Sword of the Crusader, finally tell you the full story on Sir Berich and plea for your help to redeem him: "It seems that he fell further into evil than even I had feared. I have no doubt that it all began on the day that he left the Order with the Sword and Greaves. Sir Caius tried to stop him. They fought, and Sir Berich slew Sir Caius with the holy Sword, on the Priory steps. That was the end of the old Order. Many of Sir Berich's friends left with him. I tried to hold the rest together, but it was no use. If you destroy the wraith that Sir Berich has become, you will be doing him a service. You must free him from the evil that has ensnared him." When you return to the Priory after dealing with the wraith in Underpall Cave and the Aurorans in Cheydinhal Chapel, Sir Amiel will, after you have spoken to The Prophet, be grateful to hear that his old friend has finally found peace: "While you may have performed greater deeds, none have meant more to me than your redemption of my friend Berich. Soon we will all finish our long-delayed journey to Aetherius, and Sir Berich will be among us, as of old. Thank you."

After defeating Umaril the Unfeathered in both the physical and spiritual planes, you will find yourself back inside the Priory undercroft and Sir Amiel will be the first to thank you for stopping the Ayleid sorcerer-king and his vengeance on mankind and the Eight Divines, now known as the Nine Divines: "Crusader... arise... stand and face the light. Breathe again and receive your reward. You have completed your divine task. You have restored the Order. You have defeated the enemy of the Nine. The Order shall serve as the sword and the shield of the Nine in the dark times to come. We owe you a debt of thanks. You have succeeded where we could not. You and your knights have held true to your purpose. At long last, our purgatory is at an end. We go to the glory of the Nine, to serve in their host in the life beyond this one. You may call upon our spirits when you need us. Simply pray at our tombs, and each of us will grant you a blessing from the Nine. May your sword serve the Nine all the days of your life, Crusader. Farewell."

After completing the Knights of the Nine quests, his tomb in the basement of the Priory of the Nine grants you Akatosh's Blessing (+5 Strength) and a greeting from beyond the grave: "Lord Akatosh lends you his might. When your own strength fails you, trust in the Nine." The blessing is semi-permanent: it stays in effect until you activate another of the Knights' tombs and receive a different blessing.