The Order of the CryptEdit 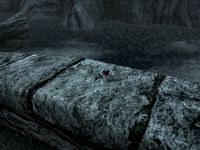 A lone flower marks the site of the ghostly apparitions

This quest will automatically begin upon installing the Spell Knight Armor Creation. You will be directed to visit the Silver-Blood Inn in Markarth to seek out rumors that might have crossed the border from High Rock. Once at the inn, your quest marker will direct you to a guest room containing a book named Crypt of the Heart - Draft. Reading it will reveal the story of the Order of the Crypt, a knightly order from Shornhelm, and the tragic tale of a knight named Simon Rodayne who fell in love with (or was tricked by) a witch of the Beldama Wyrd named Daenella. Their relationship brought the order into conflict with the witches, driving the coven further and further east. It is said that Simon's ghost haunts the banks of the Karth River, below his hilltop tomb.

You will then be directed to investigate these ghost sightings by travelling to a bridge that crosses the Karth River just next to Reachcliff Secret Entrance. On this bridge, you will find a lone red mountain flower; when approached, a Ghost Knight will appear behind you and will wander off to the south, towards Dushnikh Yal.

Follow the ghost as it makes its way up the slope. It will guide you to a grave west of Dushnikh Yal, which is surrounded by three hostile Forsworn. Kill the attackers and loot the Forsworn Shaman's body. She will be carrying a Forsworn Shaman's Note, which you must read to progress the quest. It reveals that the Beldama Wyrd has come to the Reach in search of Daenella in order to punish her for her betrayal. They have taken Simon's heart from his grave and have brought it to Karthspire Camp to defile it. Surrounding the grave, you will find the bodies of two Knights of the Crypt who had been sent to the Reach to track down and kill the Beldama witches. If you wish, you can loot their bodies for a full set of Iron Spell Knight Armor and Steel Spell Knight Armor. 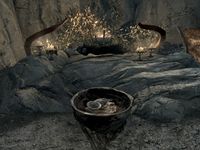 Daenella and her lover's heart

Journey to Karthspire Camp and prepare for a fight; the campsite is swarming with Forsworn, and with this Creation installed you will have to deal with the added threat of Beldama Witches and a hagraven called the Beldama Ward Mother. They are located on the eastern side of the camp.

Once you've subdued the many enemies at the campsite, approach the sacrificial altar where the Beldama witches are found. On it, you will find the corpse of Daenella, who had been captured by the witches and killed with the knowledge that the Ward Mother planned to corrupt her beloved's heart and return it to his grave tainted, damning his soul for eternity. Sure enough, you will find a Corrupted Human Heart on a pedestal in front of the altar. Take it and return to the knight's grave. 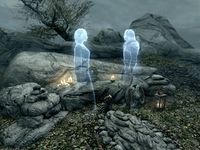 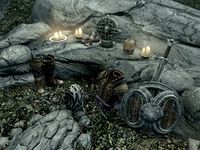 A set of ebony armor is your reward

Once you have the heart, you will be instructed to return it to the knight's grave, with the optional step of first purifying the heart of corruption.

If you choose to place the corrupted heart within the grave, the corrupted spirit of Simon Rodayne will appear and attack you for damning his soul. He wields a bound sword in combat. Once you banish the ghost, you will be directed to loot his grave for a full set of enchanted Ebony Spell Knight Armor in order to complete the quest. This set has enchantments focused on offense (see Spell Knight Armor items).

If you instead wish to purify his heart, you must first activate the Shrine of Mara found at his tomb. Once this is done, place Simon Rodayne's Heart within his grave. This will cause a brief apparition of Simon and Daenella, finally reunited in death. The ghostly lovers will then disappear, and in their place a full set of enchanted Ebony Spell Knight Armor will materialize above the grave. This set has enchantments focused on defense. Take the armor to complete the quest.

Regardless of which option you choose, you will now be able to craft Spell Knight armor from iron, steel, and ebony at any forge, provided you have the necessary skill perks.