For the region, see Wayrest.

The City of Wayrest is the capital of the correspondent Wayrest, a province of High Rock. 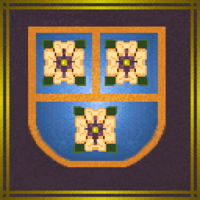 The Crest of Wayrest 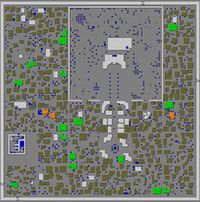 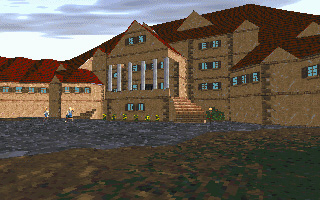 The royal family of Wayrest is mainly composed of Dark Elves. Unfortunately, it does not really show in the game since most of the textures show them as humans. The AndyFall patch corrects this feature, making those Dark Elves actually look like Dark Elves.

Situated in the middle of an expansive courtyard created by hedges is Castle Wayrest, which looks much more like an expansive manor than it does a traditional castle (Daggerfall) or exotic palace (Sentinel). The design of the castle imitates a monster of some kind with massive front paws, a snout, and spiky teeth being bore at visitors, providing a menacing vision for those who approach it from the front. Behind the castle is a relatively simple hedge maze with statues of the Nine Divines decorating its paths and the entrance area. At the very center of the front, two stairs lead up to a single door.

The entrance to the palace is a simple stone foyer with four doors to either side and two fountains leading to the massive doors of the throne chambers. Opening the two doors reveals a decorated chamber with a higher throne up some stairs just before you, where Queen Barenziah, Princess Morgiah, and King Eadwyre receive visitors. To either side of the throne platform are two more doors leading back into a dining hall, shown by the arrangement of the tables. Prince Helseth unbecomingly sits on a table near the front left. Princess Elysana can be found to the left of the throne in the audience chamber.

Aside from the royal family, three really unique people can be found in the palace:

Beyond these three chambers, the rest of the palace is off-limits to normal visitors and anyone venturing into these corridors will be subjected to the wrath of the palace guards. One is expected to run afoul of Knights, Barbarians, and Nightblades swearing their allegiance to the kingdom of Wayrest. Orcs can also be found roaming the halls of the palace, probably permitted safe haven beyond the walls of Orsinium as long as they do not cause mischief. Burglars and other ill-reputed individuals who have been caught attempting to infiltrate and pilfer from the interior of Castle Wayrest claim that, at first, they denied the size of the castle, that it could not be as large as it seemed. Many a selfish individual have been thwarted by their own kleptomania, filling their pockets to the brim with merely a fraction of the treasure within these walls, in heaps or ill-gotten from others' corpses, only to realize the impossible amount of wealth available. Or that their encumbered state is ineffective when fighting with, sneaking around, or running from the guards. The furthest recesses of the castle are said to be remnants of a time when the castle was an authentic stone-built castle, a part of it cutting into the ancient Wayrest refuse tunnels! The foremost reason for not attempting to break into Castle Wayrest is, of course, that it is illegal but those who do are cautioned not to let their own vices undo them before the palace does.

This article, which is part of the Daggerfall Redesign Project, is a stub. You can help by expanding it.
Retrieved from "https://en.uesp.net/w/index.php?title=Daggerfall:Wayrest_(city)&oldid=2433040"
Last edited on 1 July 2021, at 12:45