Shortly after you have received any of the letters revealing the true nature of the Totem of Tiber Septim, you will receive a delivery:

A street urchin races up calling "Message for (player's name) from the man in gray." The child runs off before you can grab him, leaving you holding a note.

Find the note in your inventory. It reads:

From this moment on, you may be periodically attacked by knights and barbarians, each holding a copy of this mysterious note, and sometimes another which reads:

This goes on for seven to fourteen days, after which a letter appears in your inventory. It was sent by Princess Elysana of Wayrest, and reads:

This quest is entirely optional, and the random attacks will cease after you have survived enough of them. But should you wish to follow up on Elysana's invitation, head to Castle Wayrest for a "chat".

Once inside the castle, find and speak to Princess Elysana. She exclaims:

"You are even more dashing in person than Lord Woodborne said. I just love talking to men and women of action! I know that you're looking for a certain object, (player's first name). A totem pole or something? Well, an acquaintance of mine, a perfectly delightful (contact's description), has something that may help you. If you would escort my cousin (cousin's name) to (contact's name) you can have it. Would you do this teensy weensy favor for me?"

"How exciting! It will be a real adventure. (Cousin's name) just loves to travel and has been dying to spend some time with (contact's name). Go to (town) of (town's region), to a place called (contact's residence). (he/she [sic]) will pay you (random gold) gold pieces for bringing (him/her) (cousin's name). Don't you just love these dangeous [sic] missions?"

"No? How dreadful! My poor cousin will be so disappointed. You are not nearly as fun as Lord Woodborne said you would be." 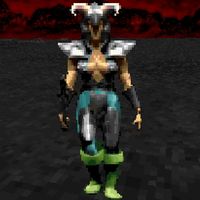 Be prepared to fend off barbarian ambushes 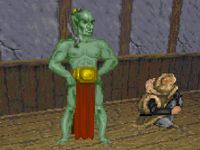 Elysana's acquaintance will always be a "majestic orc" (see bugs)

Escort the cousin (who is now following you) to the destination town named by Elysana. The town is located in whichever region you were in when the quest began—that is, when you received any of the letters regarding the Totem and Numidium as a result of the previous quest. Again, you may encounter barbarians and knights on your journey, provided they have not already shown up long before your chat with Elysana.

After you have killed a couple ambushers, Elysana's cousin will cryptically interject:

(Cousin's name) says "Who were those barbarians? They almost killed you! Maybe you should just forget about Lysandus' ghost."

If you have slain five attackers and are not in fast-travel mode, the cousin flees at sundown:

(Cousin's name) says "You're much tougher than Elysana said you would be."
(Cousin's name) suddenly runs away, (his/her) feet making no sound as (he/she) disappears into the shadows.

Regardless of the situation, continue to you destination. Ask around to locate the contact's residence, then enter it and speak to him for your reward.

Speak to the contact; his response depends on whether the cousin is with you or not. If so, the contact greets you with:

If the cousin has run off, the contact has a more interesting tale to tell:

"(Player's first name), it wasn't my fault! I was hired to set you up! Here, take the (random gold) gold. Some guy in a gray cloak paid me exactly that much to do it. (Cousin's name) was just some whore paid to go with you. You know, I just remembered. I have (bribe gold) gold pieces that are just too heavy to carry anymore. Why don't you take them and I'll just be going."

As soon as you accept the quest your reputation will drop as shown below. Additionally, you will not gain any reputation in the end.